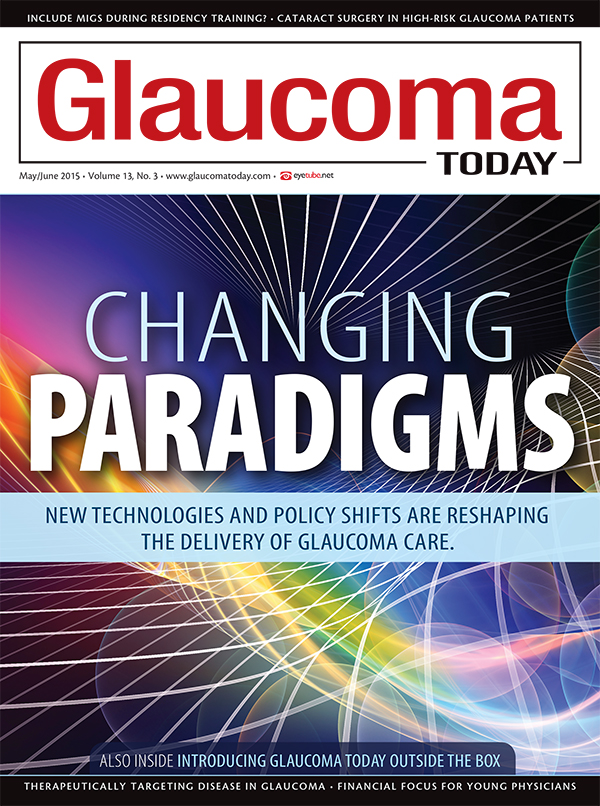 The Role of Smartphones in Glaucoma Care

The widespread availability of mobile technology is slowly improving health care delivery. Smartphones and mobile apps now allow patients to monitor their own health and wellness as well as to connect remotely with health care providers. In eye care specifically, there is a growing market of apps and smartphone adapters (Table). A recent German mHealth market research survey estimated that 500 million smartphone users worldwide will be using a health care app by 2015.1 In 2013, the FDA formally recognized this new mobile health trend by releasing guidance documents on how medical apps and accessories should be regulated.

Currently, a lot of excitement and hype surround the use of smartphones to improve glaucoma care—everything from apps to enhance patients’ medical adherence to home IOP monitoring to remote consultations through smartphone-based ophthalmic imaging. US health care expenditures are projected to grow at an average rate of 5.8% per year from 2012 to 2022,2 with a doubling of the over-65 group by 2050 as the baby boomers age.3 Are there enough doctors nationwide, and is the current fee-for-service health care system sustainable? Can smartphone technology help with the problem? There is unbridled optimism that mobile technology, data-driven computer algorithms, and a systems-based, value modifier-driven, accountable care model will save the US health care system.

The country moved in this direction of emphasizing cost-effectiveness and efficiency after the passage of the Patient Protection and Affordable Care Act in 2010. The accountable care organization (ACO) approach under this act is expected to reduce costs through better coordination of care and systematic high-risk cohort management. The Health Information Technology for Economic and Clinical Health Act of 2009 made this comparative approach possible by heavily incentivizing the adoption of electronic health records via meaningful use stages 1 through 3. Likewise, quality-based measures from evidence-based medicine such as the Physician Quality Reporting System coupled with more precise ICD-10 coding attempt to create structured data for analytics. It is clear that detailed electronic claims plus electronic health records data will be used to set national benchmark standards comparing ACO and insurance plan costs and outcomes for various diseases. Health Information Exchange Services within large health care organizations and insurers will then use all those data for predictive analytics to change patients’ and providers’ behavior in order to cut costs.4

How does a smartphone app for adherence to glaucoma therapy play into the ACO framework? The information used in analytics is only as accurate as the data collected. The literature suggests that poor adherence and persistence to prescribed topical glaucoma therapy remain a common problem.5 Released in 2012, the EyeDrops app codeveloped by Thomas Harbin, MD, MBA, was one of the first free programs compatible with Android (Google) and iPhone (Apple) that was specifically designed to allow patients and their caregivers to track multiple eye medications with automated reminders. The Singapore National Eye Center developed a similar free app called MyEyeDrops as a practical educational guide and eye drop reminder system for glaucoma patients.

Even before smartphone reminders, there was the Travatan Dosing Aid (Alcon), which electronically monitored when patients used their eye drops. A 3-month study of 53 patients with this device identified four patterns of adherence: good usage, discontinued usage, frequent drug holidays between good usage, and poor dosing.6 Complete data were collected for only 37 patients, however, probably representative of the real world, where most patients forget to bring the device or stop using it after awhile. Also, clinicians had little time or incentive to download and review the data from the dosing aid. A smartphone reminder app suffers from similar discontinuation problems and will fail if it does not fit into the current workflow. An important point here is that, if the US health care system is going to tie outcomes directly to reimbursement, then it may penalize both the sickest patients and the doctors who care for them, because predetermined fixed costs cannot easily account for nonadherence, outliers, or other uncontrollable events. 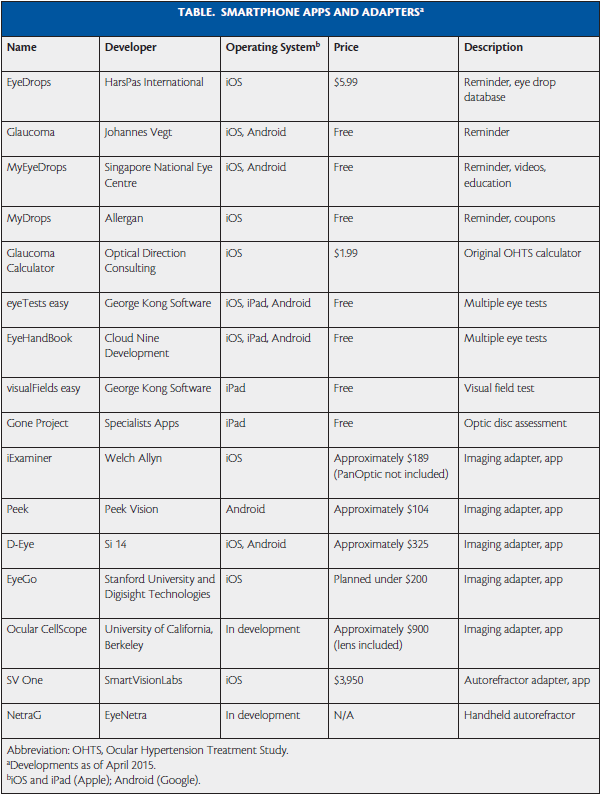 Instead of acting as a reminder system, smartphones are better suited for IOP monitoring and vision testing. Several companies are testing implantable IOP sensors that communicate with a smartphone, which can automatically send encrypted data to the cloud for analysis. Thus, it is possible that some aspects of glaucoma management may be performed at home in the future. One example is the visualFields Easy app developed by George Kong software. The advantage here is hardware consistency as opposed to Web-based visual fields on the home computer. Chris Johnson, PhD, has been studying this free visual field app for the iPad (Apple) in Nepal, and he has found that it works well for identifying moderate to severe disease (unpublished data, 2014).7 Unfortunately, a long, expensive clinical trial is required to prove the value of any new diagnostic tool or intervention, given the relatively slow nature of the disease and imprecise progression endpoints.

The most frequently performed home monitoring on a smartphone today is of visual acuity. Self-tested acuity measurements on a smartphone app such as Sightbook (DigiSight Technologies) still suffer from various reliability issues such as consistent distance from the phone to the eye and consistent lighting. The FDA, however, recently cleared the myVisionTrack/mVT app (Vital Art and Science), available by prescription only, based on smartphone vision hyperacuity testing.8

Remote consultation smartphone imaging is an exciting area. Multiple adapters are being developed to convert the modern smartphone camera into a miniature anterior segment and fundus camera. They include the Peek (Peek Vision) from England, the D-Eye system (Si 14) from Italy, and the IExaminer (Welch Allyn), EyeGo (Stanford University and DigiSight Technologies), and Ocular CellScope (University of California, Berkeley) from the United States. The adapters convert the smartphone into a direct or indirect ophthalmoscope in settings where better imaging equipment is unavailable or unaffordable. No studies have been published in glaucoma yet, although recent research demonstrated the utility of smartphones in diabetic retinopathy screening.9

Teleglaucoma care has been studied around the world, including in Finland, the Netherlands, and Canada.10 At the University of Alberta in Canada, a retrospective review of 247 patients from 2008 to 2012 managed remotely by glaucoma specialists in collaboration with optometrists found that 69% could be managed by the referring optometrist using stringent referral criteria.11 Much of the diagnostic testing data is digital, including fundus photographs, visual fields, optical coherence tomography scans, tonometry measurements, and pachymetry readings. Thus, this kind of collaborative care can be coordinated through smartphones and tablets. Glaucoma population-based screening has not been terribly successful yet for two reasons: (1) no single inexpensive test provides a definitive diagnosis of glaucoma and (2) the overall prevalence of the disease is relatively low.

Smartphones are ubiquitous, connected devices with multiple high-quality sensors. The shared data generated on an individual and population basis will have a big impact on health care delivery, as value-based care becomes a top priority. Smartphone imaging of the eye and teleglaucoma collaborative care are two areas ripe for innovation as the demand for medical services rises while reimbursement is fixed or declines. n

Robert Chang, MD, is an assistant professor of ophthalmology at the Byers Eye Institute of Stanford University in Palo Alto, California. He holds EyeGo intellectual property and is a co-inventor of the device. Dr. Chang may be reached at (650) 724-3734; viroptic@yahoo.com.