Infection After Implantation of a Subconjunctival Stent

What steps should be undertaken to avoid a catastrophe?

An 89-year-old white woman had moderate open-angle glaucoma in the right eye and advanced glaucoma in the left. In the right eye, IOP was controlled on four classes of topical glaucoma medication. The patient had a history of rosacea with associated meibomian gland dysfunction and dry eye disease that were being treated with topical cyclosporine, nonpreserved artificial tears, oral doxycycline, and lid hygiene. In the left eye, IOP was controlled off medication 6 months after receiving a Xen Gel Stent (Allergan). She therefore requested the same procedure for her better-seeing right eye to lower the IOP and reduce her dependence on topical drops.

Surgery was uneventful, and IOP was 15 mm Hg OD on no medication on postoperative day 1. Two weeks after surgery, a conjunctival erosion overlay the stent, there was Seidel-positive flow, and IOP was 3 mm Hg. The surgeon tucked the stent under the conjunctiva and used a polyglactin mattress suture (Vicryl, Ethicon) to close the eroded area. The patient had been on a topical nonsteroidal antiinflammatory drug initially after surgery, but it was discontinued at this time. Oral vitamin C was added to her regimen of oral doxycycline to facilitate conjunctival wound healing.

One month after the intervention, healing had progressed well, unmedicated IOP was 9 mm Hg, and the bleb was diffuse. At 2 months, the bleb remained diffuse, IOP was 14 mm Hg, and steroids were tapered from this point on.

Three months after bleb revision, the patient reported a 3-day history of ocular pain and marked redness. Visual acuity had decreased from a baseline of 20/50 to 20/100. She was administering topical dexamethasone twice daily, topical cyclosporine, and oral doxycycline. The bleb was low with a Seidel-positive suture track adjacent to a segment of dissolving polyglactin suture from the previous bleb repair (Figure 1). White discharge was evident near the bleb. There was no frank hypopyon, but cells, flare, and a band of fibrin were present in the inferior angle (Figure 2). 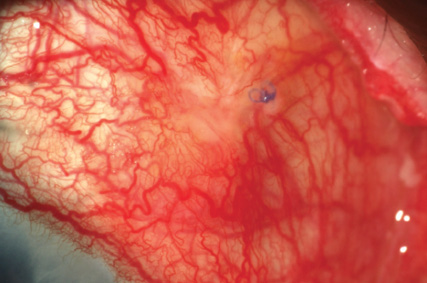 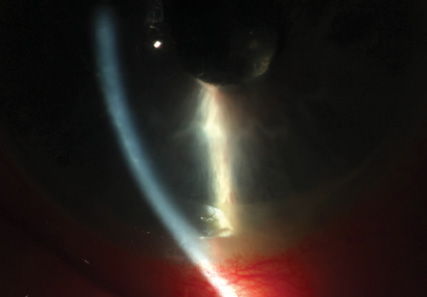 Figure 2. Anterior chamber inflammation with fibrin in the inferior angle.

How would you proceed?

Let’s call this what it is—blebitis unless proven otherwise. The patient had several risk factors for developing blebitis, including ocular surface disease, old age, antimetabolite use at the time of filtration, and a history of wound leaks.1,2 The goal at this point must therefore be to mitigate a potentially catastrophic, sight-threatening, eye-threatening infection. The first step is to control the infection at its source. I would start by prescribing a fourth-generation fluoroquinolone antibiotic applied every 2 hours, but I would have a low threshold for increasing therapy to fortified topical antibiotics.

The presence of an active leak associated with the implant means that the stent must be explanted. Given the dehiscence of the conjunctiva, explantation could potentially be performed in a minor procedure room or the OR. The scleral track that holds the stent in place will likely be self-sealing. I would send the implant for culture.

If I had any concern about progression to endophthalmitis, I would consider a vitreoretinal consultation for pars plana vitrectomy with intravitreal administration of an antibiotic. Anterior chamber inflammation alone does not suggest endophthalmitis, but vitritis indicates a need for more extensive surgical intervention.

The original surgeon attempted to close the wound after identifying a bleb leak. A repeat leak suggests the presence of a fistula track lined with epithelium. Such fistulae will not close primarily, so it will be necessary either to strip the epithelium or to permit secondary granulation if the area is Seidel-negative after explantation of the stent.

In a small series of bleb infections related to a Xen Gel Stent, the investigators reported significant recovery without a need for explantation of the device.3 The fact that this eye has had not one but two leaks associated with the implant, however, makes me nervous about leaving the device in situ and concerned about the possibility of biofilm deposition and bacterial colonization.

The history and clinical appearance suggest acute blebitis. To determine if this is actually a case of endophthalmitis, I would want to determine if any inflammatory cells are present in the vitreous to confirm if it is indeed endophthalmitis so as to decide whether this patient needs a pars plana vitrectomy or just an intravitreal injection of antibiotics. If possible, I would culture any purulent material to identify inciting organisms.

I would initiate aggressive, targeted topical treatment for the infection. Studies have shown an association of early blebitis (< 6 weeks) with Staphylococcus epidermidis. Late-onset blebitis (> 6 weeks) is associated in a greater percentage of cases with Streptococcus species (31%), gram-negative bacteria such as Haemophilus influenzae (23%), Enterococcus (7%), and Pseudomonas (7%) but fewer Staphylococcus species (7%–22%).4,5 Therapeutic options include fortified antibiotics such as vancomycin (25–50 mg/mL) or cefazolin (50 mg/mL) and fortified tobramycin (14 mg/mL), alternated every 30 minutes for 48 hours after a loading dose. Another strategy is to administer a fourth-generation fluoroquinolone every 1 to 2 hours. I often prescribe besifloxacin because it provides good coverage of Staphylococcus and is associated with low bacterial resistance owing to the drug’s use only in humans and never systemically.

In an effort to prevent further inflammation and fibrosis, I would delay steroid treatment until 24 to 48 hours after antibiotics were initiated and, I hope, some clinical improvement is observed. If the patient’s reliability and compliance are a concern, hospital admission for rigorous treatment with topical antibiotics for infection could be considered.

If possible, I would refer the patient to a retina specialist for evaluation on the same day as I made a diagnosis of blebitis regardless of whether there were cells in the vitreous. In addition, I would stop the cyclosporine for now, start treatment with aminoglycoside ointment at bedtime, and continue the oral doxycycline, but I might add a systemic fluoroquinolone. I also recently began using a hypochlorous spray both to sterilize patients’ eyelids and in the context of meibomian gland dysfunction.

I would remove the stent because bacteria has likely accumulated over and around the device. I would also consider performing another glaucoma procedure (possibly canal-based or cyclodestructive) in the future after the acute infection resolved and if the IOP began to rise.

I discussed with the patient a diagnosis of blebitis and the significant risk of endophthalmitis and severe vision loss. My priority was to control the infection, which meant sacrificing the gel stent and the bleb, and I explained to the patient that she would likely require subsequent glaucoma surgery to control her IOP after the acute infection resolved.

Concern that both the remnant of the polyglactin suture and the stent could be harboring bacteria prompted me to remove them both. I performed the procedure at the slit lamp using subconjunctival lidocaine anesthesia. To remove the stent, I used jeweler’s forceps to spread the eroded suture track until the implant was visible and could be retrieved. It slid out without resistance (Figures 3 and 4). I left the stent track to close on its own. In the interim, I prescribed topical moxifloxacin dosed every 2 hours and scheduled daily follow-up until there was evidence of resolution. The next day, the patient had an organized hypopyon, and I referred her to a vitreoretinal surgeon for an intravitreal tap for cultures and sensitivity as well as an intravitreal injection of fortified antibiotics and dexamethasone. Her condition continued to worsen over the next 2 days, and she subsequently underwent a pars plana vitrectomy. 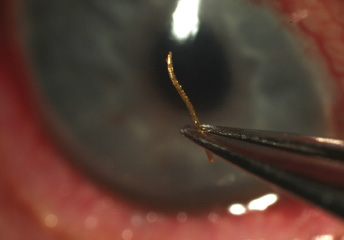 Figure 3. The stent is removed at the slit lamp. 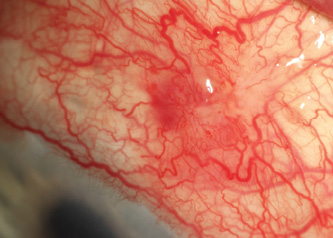 At her last visit, IOP was 7 mm Hg off glaucoma medication, and BCVA was 20/50. There was no inflammation in either the anterior or posterior segment, and the bleb had fibrosed. Her IOP measurement may reflect hyposecretion, and the IOP may rise again in the future given her underlying glaucoma. If that occurs, I would consider topical therapy supplemented by selective laser trabeculoplasty (which had controlled IOP prior to implantation of the gel stent), further surgery, or cyclophotocoagulation. If surgery were planned, based on her history of conjunctival breakdown despite aggressive ocular surface treatment, I would avoid conjunctival surgery and instead pursue a canal-based microinvasive glaucoma procedure such as implantation of a Hydrus Microstent (Ivantis) or a combination of ab interno viscocanalostomy with gonioscopy-assisted transluminal trabeculotomy. If these procedures were not likely to deliver the target IOP and filtering surgery were necessary, a tube shunt implanted in a separate quadrant unaffected by mitomycin C would be my last resort.

The Impact of Trabeculectomy in Advanced Open-Angle Glaucoma

Recurrent UGH Syndrome in an Eye With a Scleral-Fixated IOL

Recurrent UGH Syndrome in an Eye With a Scleral-Fixated IOL