Highlights of the 2019 AGS Annual Meeting

Catch up on research comparing glaucoma surgical procedures, examining real-world diagnosis and treatment, and exploring the nature of the disease itself.

Held in San Francisco in March, the 2019 Annual Meeting of the American Glaucoma Society included a day devoted to glaucoma surgery, five symposia, 25 paper presentations, and 144 posters, among other offerings. Major topics covered at this year's conference included the surgical management of glaucoma, both traditional and newer procedures; current and emerging diagnostic tests; pathophysiology of the disease; and economics and telemedicine. For this article, we selected presentations that provided clinically relevant insights. —Sarwat Salim, MD, FACS; and Albert S. Khouri, MD

This multicenter randomized clinical trial was designed to compare the safety and efficacy of tube shunt surgery to that of trabeculectomy with adjunctive mitomycin C (MMC) in patients with no history of ocular surgery. The study enrolled patients who had an IOP of at least 18 mm Hg but no higher than 40 mm Hg on maximum tolerated medical therapy. The tube shunt group received a Baerveldt glaucoma implant 350 mm2 (Johnson & Johnson Vision). In the trabeculectomy group, 0.4 mg/mL of MMC was applied for 2 minutes. 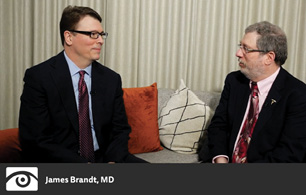 The main outcome measures were failure, qualified success, and complete success. Failure was defined as an IOP that was higher than 21 mm Hg or that was not reduced to 20% below baseline at two consecutive visits after 3 months, an IOP of 5 mm Hg or less at two consecutive visits after 3 months, additional glaucoma surgery, or a loss of light perception. The groups were well randomized, with no differences in terms of age, sex, ethnicity, preoperative IOP, number of preoperative glaucoma medications, central corneal thickness, or mean deviation. It is noteworthy that the most common diagnosis in both groups was primary open-angle glaucoma (POAG). The number of patients completing the 3-year follow-up visit was 103 in the tube shunt group and 97 in the trabeculectomy group.

No difference between the groups was found in terms of probability of failure, but, in a subanalysis, the rate of surgical failure after tube shunt implantation appeared to be influenced by preoperative IOP. At lower preoperative IOP levels (< 21 mm Hg), the tube group demonstrated a higher probability of failure than the trabeculectomy group (60% vs 39.3%). At higher preoperative IOP levels (> 25 mm Hg), the cumulative proportion of eyes in which treatment failed was lower in the tube group than in the trabeculectomy group (10% vs 29.7%). In both groups, the most common reason for treatment failure was inadequate IOP reduction, but there was no difference in reoperation rates.

In terms of early complications, wound leaks and encapsulated blebs were more commonly reported in the trabeculectomy group. There was no significant difference in the rate of late postoperative complications or serious complications (defined as reoperation due to complications or vision loss of 2 Snellen lines or more). Visual acuity loss and cataract progression occurred with similar frequency after both surgical procedures.

Because this study enrolled patients who met specific inclusion and exclusion criteria, its results cannot be generalized to different patient groups. For example, patients with several types of secondary glaucoma, including neovascular and uveitic glaucoma, were excluded. Similarly, this study's results with the Baerveldt implant cannot be generalized to other types of glaucoma drainage devices. All patients in the trabeculectomy group received MMC at the same concentration and for the same duration, whereas these are usually tailored to an individual patient's age, ethnicity, or glaucoma severity in real-world clinical practice.

Definitions and quantification of complications were not standardized. Moreover, a low incidence of certain complications limited the power of the study to detect significant differences. Finally, patients and investigators were not masked to the randomized treatment assignment, introducing the potential for bias. (Editor's note: For more insights into the PTVT study, view Dr. Salim's video interview with Drs. Brandt and Gedde at the following link: http://bit.ly/GTSalim.)

Thomas W. Samuelson, MD, related the outcomes and complications of two devices for microinvasive glaucoma surgery in a head-to-head study.3

For this prospective multicenter trial, patients were randomly assigned to receive either a single Hydrus Microstent (Ivantis; n = 75 eyes) or two iStent Trabecular Micro-Bypass Stents (Glaukos; n = 77 eyes) as a standalone procedure for open-angle glaucoma without concurrent phacoemulsification. The study enrolled patients with mild to moderate open-angle glaucoma, no history of incisional glaucoma surgery, and phakic or pseudophakic status who were using two or fewer IOP-lowering medications preoperatively. After a 30-day medication washout, mean IOP was 23 to 39 mm Hg (see following discussion of potential limitations).

The study's two main endpoints were IOP reduction and number of postoperative medications. The groups were well randomized, with no differences in terms of age, sex, ethnicity, lens status, history of selective laser trabeculoplasty, baseline IOP, number of preoperative medications, or mean deviation. The most common diagnosis among enrolled patients was POAG; 4% to 8% of patients had pseudoexfoliative glaucoma.

Device placement was 100% successful in the Hydrus group and 97% successful in the iStent group (two patients received only a single iStent). Although both devices reduced medication use after surgery, patients in the Hydrus group required fewer postoperative medications (1.15 vs 1.91; P = .0014) and demonstrated a higher rate of complete success (31.0% vs 10.7%; P = .003) at 24 months.

Early postoperative complications, including hyphema and device obstruction, occurred with equal frequency in both groups. Reoperation rate for glaucoma was reported to be 9.1% in the iStent group and zero in the Hydrus group (P < .05).

Dr. Samuelson stated that a potential weakness of the study related to a change in protocol from the original design. Specifically, the terminal washout in the original study design did not take place as intended because some patients were using two or three drugs by that time and surgeons were not comfortable discontinuing medications in some patients. Although this dilemma applied to both study arms, there was a disproportionate number of multiple drug regimens in the iStent arm, and selective washout would have confounded the study results—thus the protocol change.

Dr. Samuelson also emphasized that the data pertain to standalone surgery (off-label in the United States) and cannot be generalized to surgery combined with phacoemulsification.

COMPARING A SUBCONJUNCTIVAL IMPLANT TO TRABECULECTOMY 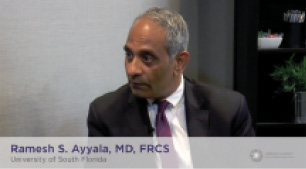 The retrospective design could result in various sources of bias. In addition, because the patient population in this study comprised predominantly African American and Hispanic individuals, the results may not be applicable to other populations. The concentration and application duration of MMC varied among surgeons. Finally, more patients who received the Xen Gel Stent had a history of previous glaucoma procedures and concurrent cataract surgery, which could have influenced the final results.

The use of telemedicine in ophthalmology is well established, especially for diabetic retinopathy and retinopathy of prematurity. The reason behind its successful implementation for these conditions is that they can be diagnosed and graded with a single imaging modality: fundus photography.

Drawing on her own experience, Lindsay A. Rhodes, MD, discussed why the adoption of telemedicine has been slower in the field of glaucoma.5 She noted that making a diagnosis of glaucoma can be challenging, particularly early in the course of the disease, and that it often requires multiple structural and functional tests of the optic nerve. The cost and limited portability of glaucoma imaging modalities such as spectral-domain OCT (SD-OCT) units, perimetry machines, and fundus cameras make deploying teleglaucoma in the community challenging. Another major obstacle is ensuring patient adherence to follow-up care after a diagnosis has been made.

Dr. Rhodes explored how teleglaucoma could be used to increase the detection and management of glaucoma. Previous studies have found that nearly half of people with the disease are undiagnosed, and barriers such as cost of medication and lack of transportation can limit patients' access to traditional care in a clinical setting. Population-based screenings have not been supported by the US Preventive Services Task Force. If patient risk factors such as age, race, and family history are used to identify individuals with an increased pretest probability of glaucoma, however, then it becomes possible to diagnose glaucoma based on a positive test result from an SD-OCT scan or fundus photograph.

Dr. Rhodes described a model that she and colleagues at the University of Alabama at Birmingham tested in a retail-based setting. They engaged community partners to spread awareness and promote attendance at screening events, and they used patient navigators, social workers, and technology to increase follow-up rates and to target high-risk populations. She reported high patient satisfaction with the program and moderate agreement on diagnosis between the optometrists and glaucoma subspecialist involved.

“In creating a community model of glaucoma care, we wanted to provide accessible and convenient care that makes it easy for patients to be diagnosed and followed,” Dr. Rhodes stated. “We would also like to continue to utilize new and improved imaging modalities in the detection of glaucoma such as smartphone-based fundus photos, new tablet-based visual field testing, virtual reality–based objective visual field testing, and SD-OCT.”

Creating a community-based program for glaucoma detection and management could allow glaucoma subspecialists to focus on the surgical needs of patients with advanced disease.

EYE DROP USE AMONG HOSPITAL INPATIENTS

A group of researchers addressed lack of eye drop use among glaucoma patients during hospital stays.6 The objectives of the study were, first, to determine how often house staff members did not reconcile glaucoma medications (ie, did not follow a process by which home medications were entered into a patient record so that synonymous medications could be given from the hospital formulary) and, second, to assess how this affected eye drop administration for patients with glaucoma who were admitted to the hospital. As a secondary measure, the investigators looked at the presence of glaucoma as a pertinent past medical problem in each patient's intake history and physical (to serve as a surrogate for practitioner recognition of glaucoma as a chronic and relevant disease).

The researchers found that only 63.8% of inpatients with glaucoma had their eye drops administered. Of note, 81.3% of these patients had had their eye drops reconciled, but this process did not automatically result in eye drop administration because that would require a conscious decision by the practitioner to allow continuation (usually a few extra mouse clicks in an electronic medical record). Appropriate medication reconciliation and recognition of glaucoma in the intake history and physical had a significant impact on inpatient eye drop administration (P ≤ .001). Interestingly, the house staff members' appreciation of glaucoma as a chronic medical problem was very poor; the disease was listed on only 42.5% of the intake history and physical forms.

Appropriate reconciliation is an important issue because it likely affects patients' adherence to prescribed medical therapy after discharge, especially among those transitioning from a hospital to a long-term care facility. Glaucoma does not appear to receive the same recognition as other chronic medical conditions (eg, gout, depression, benign prostatic hyperplasia), for which inpatient drug administration rates were 80% to 100%.6 House staff members' unfamiliarity with classes of glaucoma medication and underappreciation of the vision-threatening consequences of therapeutic noncompliance likely led to the situation illuminated by this study.

Marissa K. Shoji, BA, reported on how OCT angiography (OCTA) has facilitated imaging of the microvasculature of the optic nerve head (ONH), making visible vascular pathology in this region in patients with glaucoma.7 Other studies have examined the nailfold capillaries and demonstrated abnormalities in systemic circulation in patients with glaucoma. For the study presented by Ms. Shoji, she and her colleagues assessed both the microvasculature of the optic nerve and the nailfold capillaries in patients with POAG and in control individuals. 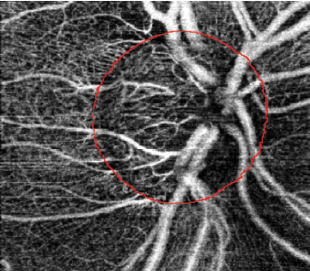 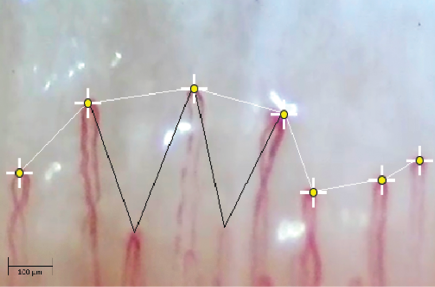 Although the sample size for this exploratory study was small (n = 34), the findings carry important implications for the glaucoma subspecialty and for ophthalmology: They suggest that glaucoma may be both an ophthalmic and a systemic disease. If that idea is supported by future studies, it could lead to the identification of novel biomarkers and new treatment targets.

Light on the Horizon

Light on the Horizon