A novel device and an investigation of the timing of ripcord removal provide glaucoma specialists with more options and guidance on the postoperative management of a nonvalved tube.

This prospective noncomparative pilot study evaluated the safety and efficacy of the eyeWatch device (not FDA approved; Rheon Medical). Investigators monitored 15 eyes of 15 predominantly white patients for 15.6 ±3.5 months after implantation of the device connected to a Baerveldt glaucoma implant (BGI, Johnson & Johnson Vision) with a surface area of either 250 mm2 or 350 mm2. Patients had refractory open-angle glaucoma, and prior filtering surgery had failed despite maximum tolerated medical therapy. The BGI was placed in a standard fashion, and then the eyeWatch was secured to the sclera, inserted into the anterior chamber, connected to the tube of the BGI, and covered with a pericardium patch graft (Figure 1). Using a magnetic external control unit—the eyeWatch Pen—to rotate an internal magnetic disc that is adjacent to the tube inside the eyeWatch, the surgeon could noninvasively modify the resistance along the tube during the postoperative period (Figure 2). 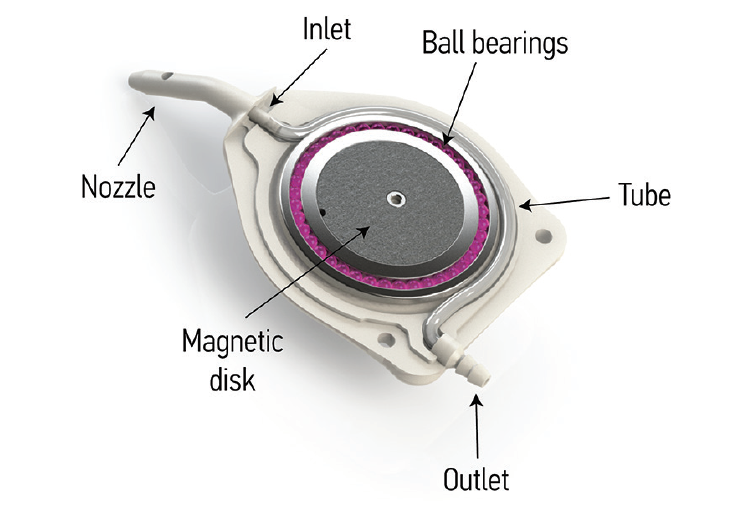 IOP decreased from 26.2 ±6.8 mm Hg on 3.0 ±0.7 glaucoma medications preoperatively to 11.9 ±2.8 mm Hg on 0.8 ±0.9 medications at 12 months. The complete success rate was 40%, and complete success was defined as an IOP of at least 6 mm Hg but no more than 18 mm Hg, more than a 20% reduction in IOP from baseline, and no need for medication. Qualified success, defined as meeting the same IOP criteria but with glaucoma medications allowed, was achieved in 93% of eyes. Failure occurred in one eye (7%), in which the IOP was higher than 18 mm Hg at two visits after 3 months. Mean BCVA for all eyes was 20/80 both before and after surgery.

Two eyes developed a conjunctival wound leak, one of which required surgical revision. Two eyes developed a choroidal detachment that resolved spontaneously. No interventions at the slit lamp, including paracentesis, antimetabolite injection, and bleb needling, were required.

The investigators concluded that the eyeWatch is a safe and effective device for modifying IOP during the early postoperative period after surgery involving a nonvalved tube shunt.

How is tube resistance adjusted?

The eyeWatch housing encases a tube and a magnetic disc that rotates around a point eccentric to its axis of symmetry. Rotating the magnetic disc using the eyeWatch Pen magnet compresses or decompresses the drainage tube, thus altering resistance. The eyeWatch Pen has a compass meter that is held 1 to 2 mm in front of the implant to give a reading ranging from 0 to 6, fully open to fully closed. Mean positions of the eyeWatch's rotor started at a high restriction level of 5.8 on postoperative day 1 and ended at 0.9 at the 1-year follow-up visit, after the tube plate bleb capsule had formed adequate resistance. All adjustments occurred within the first 60 days of follow-up.

If the device is magnetically adjusted, will this prevent patients from getting MRIs?

The investigators reported that five patients underwent MRI for nonophthalmic reasons. None developed discomfort during imaging, and the imaging artifacts were not clinically significant. Patients did, however, require new readings of the eyeWatch rotor resistance setting after MRI and an appropriate adjustment back to the position set before MRI.

The 81 patients in this study were predominantly African-Americans who had severe primary open-angle glaucoma. They all received a BGI 350 mm2 and a 6-0 polypropylene ripcord suture (Prolene, Ethicon) ligated by a 7-0 polyglactin suture, after which they were monitored for 6 months. At the time of enrollment, patients were randomly assigned either to observation (n = 37) or to have the ripcord removed 3 weeks after surgery (n = 44). Analysis, however, was complicated by a high crossover rate: Seven patients in the scheduled removal group did not have the suture removed 3 weeks after surgery, mostly due to hypotony, whereas two patients in the observation group underwent ripcord removal at week 3 because of elevated IOP.

At baseline, mean IOP was 23.0 mm Hg on 2.8 topical glaucoma medications in the scheduled removal group and 22.6 mm Hg on 2.3 medications in the control group. At the 6-month follow-up visit, IOP had decreased by 8.6 and 8.4 mm Hg in the scheduled removal and control groups, respectively (P = .91). Success was prospectively defined as an IOP of at least 5 mm Hg but no higher than 15 mm Hg without further surgery. Success was achieved in 59.1% of the removal group and 64.9% of the control group (P = .59). On average, the removal group experienced a greater decrease in number of glaucoma medications at 6 months (1.3 vs 0.5 fewer medications, P = .01).

How were the ripcord sutures removed?

After preparing the eye with proparacaine and povidone-iodine 5%, the surgeon performed a subconjunctival injection of lidocaine 1% with epinephrine over the ripcord suture. An OVD (Healon, Johnson & Johnson Vision) was injected into the anterior chamber through an existing corneal paracentesis. The surgeon then entered the conjunctiva over the suture and used jeweler's forceps to remove the ripcord. IOP was checked immediately and 30 minutes after suture removal.

What other surgical and postoperative interventions with the BGI could benefit from further study?

Further prospective randomized studies could help to clarify the safety and efficacy of different surgeons' techniques, including variations in the number and type of tube-venting slits, whether the vents themselves are stented or wicked with sutures, which suture (eg, 6-0 polypropylene, 4-0 nylon, or other) is placed in the tube's lumen to stent it, and whether aqueous suppression is routinely employed postoperatively to modify formation of a bleb capsule over the plate.

Glaucomatous Progression in a Young Patient

Getting It All Done