Just a pain for the patient or a canary in a coal mine?

Headache syndromes often involve the visual system, and patients frequently seek eye care for symptoms that may or may not be related to migraine aura. Although it is always important to evaluate these patients for ocular causes of visual disturbances and to treat those causes, if present, ophthalmologists often face patients who are experiencing visual disturbances in the absence of visible ocular pathology.

Headaches come in many forms, as described in the International Headache Society guidelines.1 Migraine is the second most common form of primary headache disorder, behind only tension-type headache. The Global Burden of Disease Study of 2015 ranked migraine the third-highest cause of disability worldwide in both men and women less than 50 years of age.2,3 Migraine is classified into migraine with aura (classic migraine) and without aura (common migraine). This distinction is important because several meta-analyses of the literature have shown a twofold increase in the risk of ischemic stroke for patients who experience migraine with aura versus those who experience migraine without aura.4

Left untreated, the headache in migraine lasts 4 to 72 hours and is associated with at least two of the following four characteristics:

The headache is accompanied by at least nausea and/or vomiting or by photophobia and/or phonophobia.1

Aura in migraine consists of recurrent attacks of unilateral, fully reversible visual, sensory, or other central nervous system symptoms that evolve over minutes and last less than an hour (most commonly 10–30 minutes). Aura is often unilateral and dynamic and involves at least one positive visual phenomenon. It is usually followed by headache but can occur in isolation without reported pain. The term ocular migraine is commonly used to refer to painless, typical visual auras. More cautious usage of that term is warranted, however, because it can imply a visual migraine aura that presents bilaterally with intracranial pathology, or it can refer to a retinal migraine with vasospastic vision loss in one eye. Visual disturbances seen in migraine aura may be divided into three types.

No. 1: Positive visual phenomena/hallucinations. The patient sees things that are not there, including lights, patterns, or something obstructing vision. These are the classic migraine aura descriptions of scintillating scotoma or fortification spectra (Figure, left).

No. 2: Negative visual phenomena. Areas of vision are missing, such as homonymous field loss, constriction of the visual field—often described as tunnel vision—scotomas, or a total loss of vision in either or both eyes (Figure, center).

A migraine patient may experience any single or combined version of the aforementioned visual symptoms, which completely reverse, have a stereotyped pattern for each patient, and can change over a lifetime (see Visual Snow). Visual auras can be debilitating, instilling fear in patients during highly demanding visual tasks such as driving because these auras interfere with the visual field.

Figure. Visual disturbances seen in migraine aura. Positive visual phenomena are the most common. An object in the way of the patient's view moves from center to periphery in a centrifugal, spreading pattern (left). Negative visual phenomena such as a missing area of visual field develop, last for 10 to 30 minutes, and then resolve (center). Visual distortions or illusions happen when the patient perceives a normal scene as if it were fractured, underwater, or otherwise altered, often in a dynamic pattern (right).

A persistent positive visual phenomenon associated with migraine but distinct from persistent migraine aura is known as visual snow.1 This chronic illusion persists in the absence of acute attacks and is more frequently found in patients with a history of migraine. They often describe the phenomenon as looking through TV static or snowfall.

Visual snow is distinct from persistent migraine aura (Figure). Positron emission tomography scan studies have linked this phenomenon to hypermetabolism in the supplementary visual cortex (lingual gyrus).2 A similar link has been found in patients with chronic photophobia, linking light sensitivity to migraine on a pathophysiologic level.3 Although visual snow is harmless in isolation, any positive visual phenomenon that is new should prompt visual field testing and further workup based on accompanying historical details as described elsewhere in this article. 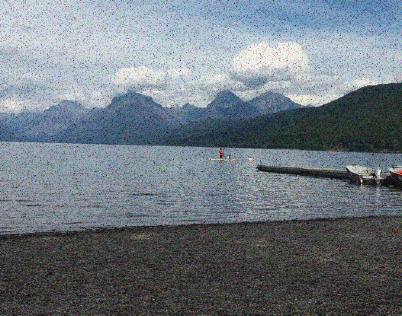 Figure. Visual snow is one type of chronic altered perception commonly reported by patients with a history of migraine. They describe a TV static-like disruption of their entire visual field that is constant—present even in the absence of headache.

Although more than 90% of auras are visual, patients may experience other phenomena such as concurrent sensations of pins and needles emanating from a point to a side of the body or face or, more rarely, aphasia or other speech disturbances. Other prodromal symptoms (eg, blurry vision and fatigue) may signal an oncoming migraine 24 to 48 hours before headache onset.

A thorough history provides critical guidance on the differential diagnosis and workup. Neurologists frequently ask patients to keep a headache or headache aura journal or calendar. By documenting the characteristics, timing, and evolution of symptoms as well as any associated neurologic features, patients may be able to identify environmental triggers and gauge their responses to treatment more accurately. Common environmental triggers include dietary consumption of chocolate, red wine, sugar, or monosodium glutamate. High-stress environments, erratic sleep schedules, bright sunlight, strong odors, extreme exertion, and/or medication use or overuse can also be to blame. Triggers are individualized and can change over time.

By definition, the diagnosis of isolated migraine and other primary headache syndromes requires that there be no causative pathology on diagnostic evaluation. The examination of a patient presenting with headache and visual disturbances should therefore include careful documentation of BCVA and color vision, assessment for a relative afferent pupillary defect, and a dilated fundus examination to identify retinal or optic nerve pathology indicating a causative structural lesion. Both confrontation and formal visual field testing is highly recommended to identify optic neuropathy or homonymous defects, localizing the defect posterior to the chiasm. OCT imaging of the macular ganglion cell layer and retinal nerve fiber layer may help to localize and obtain a baseline of optic nerve structural changes, especially if optic nerve atrophy is suspected.

Patients with migraine often experience aura, photophobia, and eye pain. Investigators for a cross-sectional survey-based study evaluated visual quality of life, headache impact, aura, dry eye, and photophobia in 62 patients with migraine.1 Of these patients, 17 had episodic migraine and 45 had chronic migraine. Twenty-three of the patients reported experiencing aura, and 39 did not report aura.

Patients completed several validated questionnaires, such as the Visual Functioning Questionnaire-25, the Headache Impact Test, the Visual Aura Rating Scale, the Ocular Surface Disease Index, and the Utah Photophobia Score. Investigators looked for correlations between patients' responses to the questionnaires. The researchers found that dry eye had the greatest negative effect on visual quality of life and headache impact.

When do a patient's visual disturbances and headache warrant further workup? Several situations should raise concern about a secondary headache syndrome:

Many eye care providers are undertrained in headache classification, but knowing the basic features common among patients with associated visual disturbances and recognizing the warning signs of secondary headache are critical to making clinical decisions. Prompt referral to an emergency department, a neurologist, or a neuro-ophthalmologist may be necessary when the diagnosis or management strategy is uncertain.

4. Hansen JM, Charles A. Differences in treatment response between migraine with aura and migraine without aura: lessons from clinical practice and RCTs. J Headache Pain. 2019;20(1):96.

Keys to Success With the iStent inject

A Commitment to Quality of Life