In the midst of our busy clinics, glaucoma specialists occasionally encounter perplexing cases that leave us scratching our heads. Recently, a 90-year-old White woman was referred for evaluation of ongoing progressive myopia in her right eye. Her optometrist reported that, over the past year, the refraction in the patient’s right eye had changed from plano to -5.00 D, while the refraction in her left eye remained plano. Her ocular history included uneventful cataract surgery on both eyes in 2007. She had high blood pressure, diabetes, mitral valve insufficiency, and dyslipidemia as well as generalized anxiety and mild dementia. She had no history of recent trauma or eye surgery.

Upon examination, the anterior chamber seemed slightly shallower in her right eye compared with her left eye. IOP was 13 mm Hg OD and 11 mm Hg OS. The angle in the right eye was closed with iridotrabecular contact over 270º, whereas the angle in the left eye was wide open, exposing the ciliary body band over 360º. The dilated fundus examination was unremarkable. OCT imaging of the optic nerve head revealed a healthy retinal nerve fiber layer in both eyes.

Anterior segment OCT (AS-OCT) was particularly helpful in showing shallowing of the anterior chamber in the right eye, with a closed angle and a reduction in anterior chamber volume from 21.64 mm2 to 14.94 mm2 (Figure 1). Given the patient’s progressive myopia, anterior chamber shallowing, and angle closure despite normal IOP, a diagnosis of spontaneous malignant glaucoma was made. 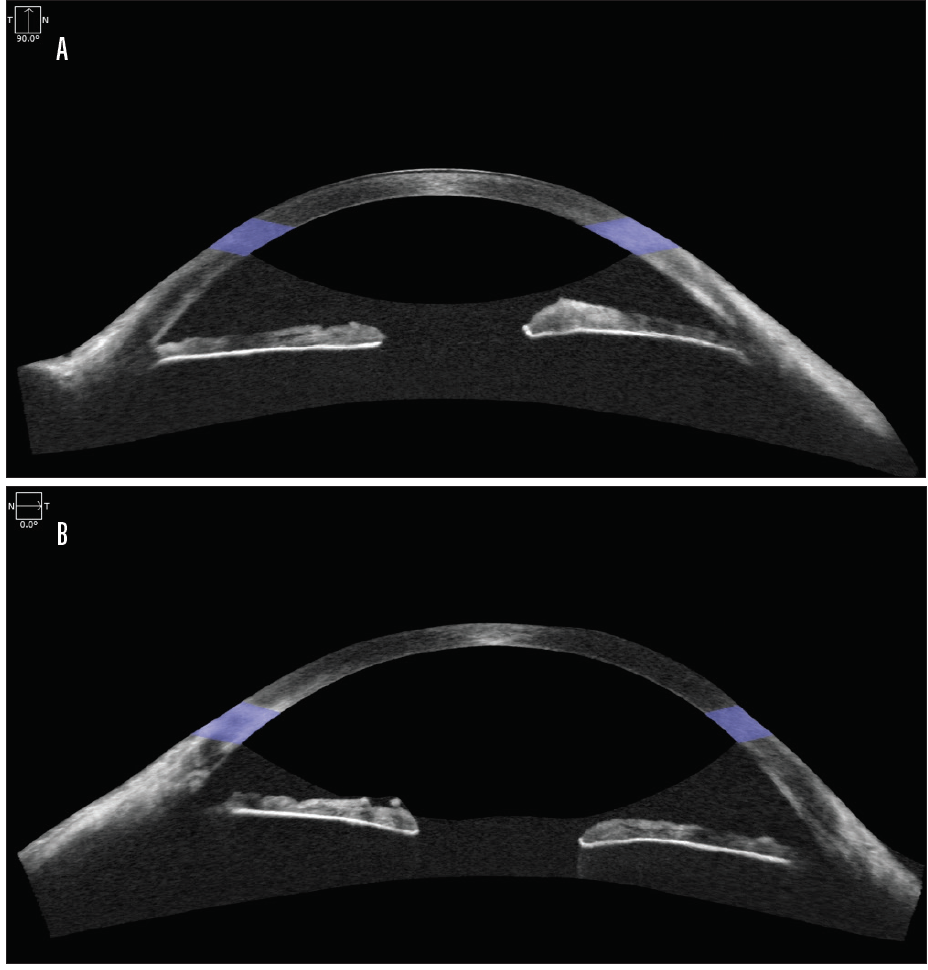 A 1-month course of cycloplegic drops (atropine 1% twice daily) led to an improvement in anterior chamber depth and myopia (-3.50 D). Because the malignant glaucoma persisted, an Nd:YAG laser capsulo-hyaloidotomy was performed at the periphery of the capsular bag to create a communication between the vitreous cavity and the anterior chamber. At the patient’s most recent follow-up visit, the anterior chamber was deeper, the angle was open, and her myopia had nearly resolved.

Given the challenging diagnosis of malignant glaucoma, AS-OCT was helpful in this case for confirming angle closure and anterior chamber shallowing. The surface area comparison was particularly useful for quantifying the difference in anterior chamber area. This case illustrates some of the many applications of AS-OCT in clinical practice.

A Case for Conservative Management

A 51-year-old White man was referred to us for a surgical consultation. The patient had uncontrolled IOPs of 30 mm Hg OD and 27 mm Hg OS (maximum: 36 mm Hg OD and 34 mm Hg OS) on four topical agents and oral acetazolamide. Recent bilateral selective laser trabeculoplasty had a minimal effect, and ancillary testing suggested progression of structural and functional damage to both eyes. Iris transillumination defects were present, the angles were open, the trabecular meshwork was moderately pigmented, and the lens was clear in each eye. Uncontrolled pigmentary glaucoma was diagnosed in both eyes, and bilateral gonioscopy-assisted transluminal trabeculotomy (GATT) was recommended.

GATT was uneventful in both eyes. The IOP was stable in the midteens at postoperative week 6 without medication in the left eye. In the right eye, however, an IOP of 4 mm Hg and a slight relative shallowing of the anterior chamber on postoperative day 4 prompted further investigation. AS-OCT imaging with the Casia SS-1000 (Tomey) revealed a nasal cyclodialysis cleft spanning 39º of arc, with adjacent ciliochoroidal effusions measuring 623 μm in maximum height (Figure 2). Gonioscopic visualization was inadequate given the shallow anterior chamber and corneal striae on indentation due to hypotony.

Figure 2. On postoperative day 4, AS-OCT revealed a nasal cyclodialysis cleft spanning 39º of arc with adjacent ciliochoroidal effusions that had a maximum height of 623 µm.
Courtesy of Thomas A. Berk, MD, and Hady Saheb, MD, MPH, FRCSC

Treatment was initiated. The patient’s routine postoperative steroid regimen was reduced, and twice-daily atropine therapy was started. At 3 weeks postoperatively, the anterior chamber had shallowed further, and IOP was 2 mm Hg. BCVA was 20/25, and no hypotony maculopathy was present. Repeat imaging with AS-OCT revealed a reduced cleft size (35º) and effusion height (493 μm; Figure 3). Conservative management was therefore continued.

At 5 weeks postoperatively, early superficial macular folds were evident, BCVA was 20/50, and IOP was 2 mm Hg. Steroids were stopped, and atropine was continued. At 10 weeks postoperatively, BCVA was 20/70, IOP was 5 mm Hg, and OCT imaging revealed deeper macular folds and optic nerve head swelling. At this point, given the persistent hypotony maculopathy and decreasing BCVA, more invasive treatment options were considered. However, AS-OCT showed a continued reduction in both cleft size (14º) and effusion height (174 μm; Figure 4). This objective and quantifiable anatomic improvement on serial imaging was directly responsible for our decision to continue with conservative management.

By this time, a cataract was forming, and significant macular folds remained. Phacoemulsification was performed to improve visual acuity, increase anterior segment inflammation in an effort to promote cleft closure, and improve angle access should laser gonioplasty subsequently be needed. As expected, an IOP spike occurred 3 weeks after phacoemulsification. We prescribed three topical agents that were gradually discontinued soon after. At 6 months after phacoemulsification, BCVA was 20/20, IOP was 11 mm Hg on no medication, and imaging showed resolution of the macular folds and complete resolution of the cyclodialysis cleft and related effusions (Figure 5). 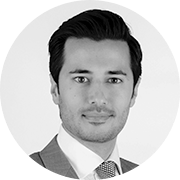 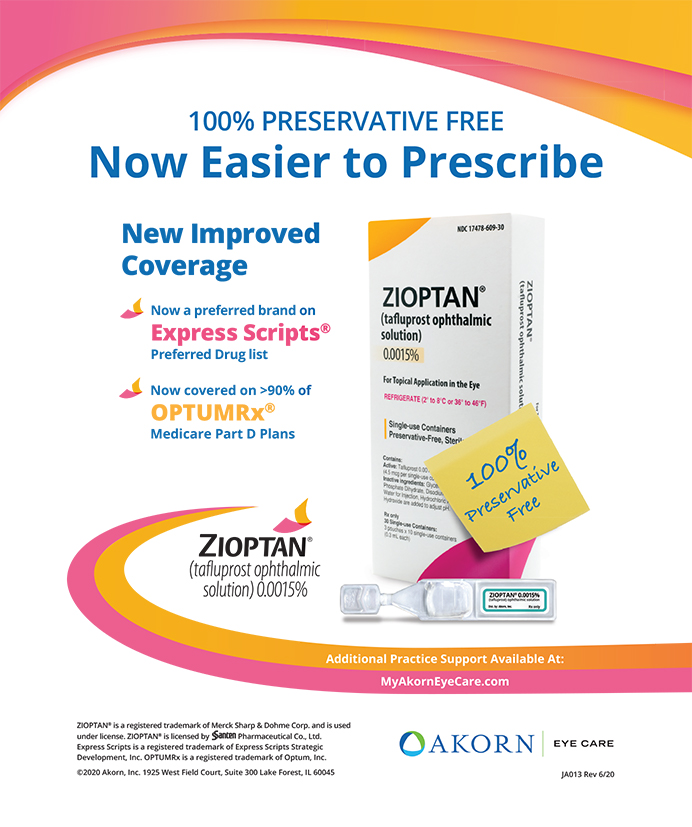 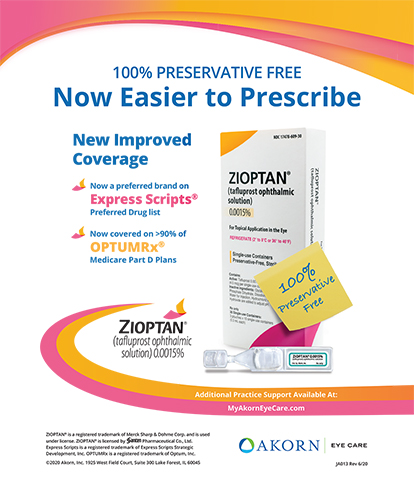