Current and future applications paint a fuller picture of glaucoma and its management.

Visualization of the anterior segment has advanced significantly in recent years. Anterior segment imaging modalities offer a range of valuable clinical applications, some of which are currently useful in everyday glaucoma practice and some of which are not yet ready for primetime. Technologies for imaging the outflow system fall mainly into the categories of ultrasound biomicroscopy (UBM) and anterior segment OCT (AS-OCT). This article provides an overview of the current uses and future capabilities of UBM and AS-OCT in the management of glaucoma.

UBM uses high-frequency sound waves to provide lateral and axial resolutions of 50 µm and 25 µm, respectively. This technique can be used to image the posterior structures behind the sulcus and the ciliary body. The main limitations of UBM are that it has largely been a technician-dependent modality and that it is a contact technique that compresses the eye using a water chamber or water bath, which may, in turn, distort the ocular structures.

More recently, a technician-independent technology for UBM, the ArcScan Insight 100 (ArcScan), came onto the market. To use this platform, the patient simply leans forward into a self-contained, sealed water bath. Image capture takes less than 3 seconds per quadrant without contact of the ocular surface. The ArcScan has the capability to rotate 360º and can be used to capture images of all quadrants of the anterior segment at a high resolution of 1 to 3 µm (Figure 1). 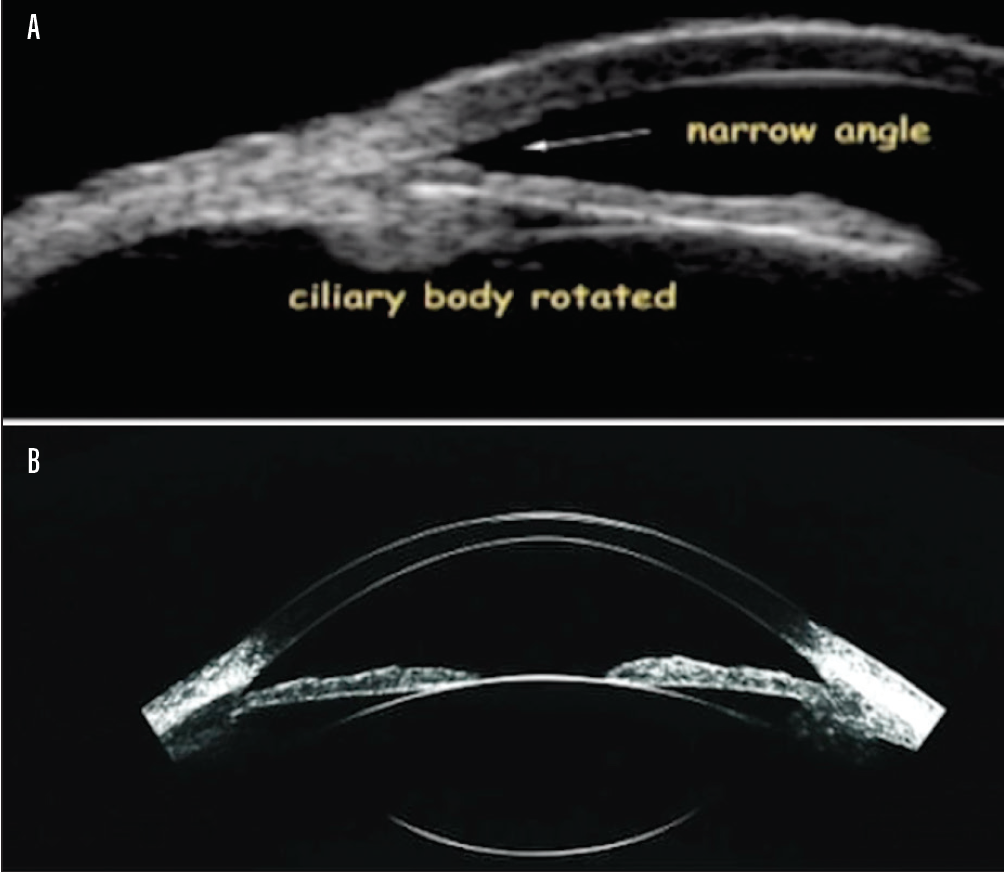 AS-OCT uses coherent light rather than sound waves and is a noncontact, noninvasive imaging technique. The biggest limitation of AS-OCT is that it cannot image behind an opaque structure. However, in terms of ease of use and reproducibility, this modality is without compromise.

A range of AS-OCT devices are available on an international scale, including the Visante and Cirrus (both Carl Zeiss Meditec), SL-OCT and Spectralis (both Heidelberg Engineering), iVue (Optovue), RS 3000 (Nidek), Casia SS-1000 (Tomey), and Triton (Topcon).1 Some of these platforms can image only one meridian at a time, whereas others can image multiple meridians. The Casia SS-100, which is not yet available in the United States, can image 128 meridians at once.

UBM AND AS-OCT IN PRACTICE

Glaucoma specialists can use anterior segment imaging to obtain certain information that may guide treatment decisions. UBM and AS-OCT techniques can be used to visualize the anterior chamber angle, Schlemm canal and downstream pathways, blebs, and surgical devices. For visualizing the anterior chamber and surgical devices, imaging technologies have made some significant breakthroughs and are coming into almost everyday use. However, techniques for visualizing Schlemm canal, the downstream pathways, and blebs are not quite ready for routine use.

Anterior chamber angle. Angle closure has a significant impact on numerous populations around the world, such as in China, Southeast Asia, India, and Hispanic and Central American countries. A great deal of work to prevent and potentially cure angle-closure glaucoma has been conducted worldwide, including several landmark clinical trials.

Results from the Zhongshan Angle Closure Prevention (ZAP) trial2 and the Effectiveness of Early Lens Extraction for the Treatment of Primary Angle-Closure Glaucoma (EAGLE) study3 suggest that lens extraction may be the best intervention for patients with angle closure. The Investigating Management of Primary Angle Closure and Treatment (IMPACT) study4 and Koh et al5 used gonioscopy, nerve-based imaging, functional testing, and AS-OCT parameters to evaluate patients with narrow occludable angles and predict which were likely to progress. Studies such as these have contributed valuable information on how best to intervene in these cases; the challenge is identifying patients for treatment. Fortunately, AS-OCT can be used in the clinic to visualize several anatomic landmarks and to determine whether the anterior chamber angle is open or closed. AS-OCT can also be used to assess the effects of interventions such as laser peripheral iridotomy and lens extraction in patients with angle closure (Figure 2).

However, visualization of Schlemm canal and the downstream pathways is not limited to AS-OCT or UBM. Fluorescein and other dyes can be used to visualize the collector channels, even in the OR. Certain techniques have also been developed to aid in functional visualization of the outflow pathways. For example, Davinder Gover, MD, MPH, and colleagues have discussed visualization of the episcleral fluid wave as a marker of success at the time of trabecular meshwork–based procedures. In a recent case of combined cataract surgery and MIGS, my colleague Bac Nguyen, MD, used trypan blue dye to stain the trabecular meshwork (Figure 3). This is an effective approach for visualizing the collector channels and can be useful for identifying the trabecular meshwork in lightly pigmented eyes. 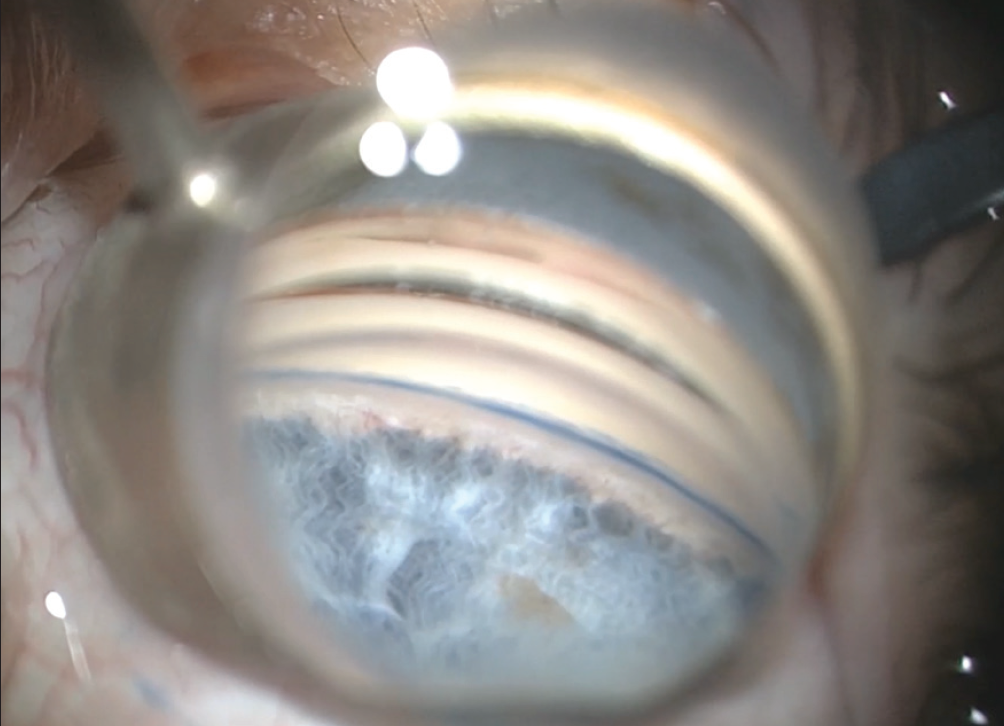 Figure 3. Trypan blue dye used to visualize the trabecular meshwork prior to implantation of a MIGS device.
Courtesy of Bac Nguyen, MD

Blebs. Several groups, specifically in Japan, Singapore, and the United Kingdom,1,6,7 have looked at bleb morphology and how the qualities of a bleb on AS-OCT or UBM could help predict the success rates of trabeculectomy. This diagnostic capability may become more important with the growing use of other bleb-forming surgical procedures, such as implantation of the Xen Gel Stent (Allergan) and the Preserflo MicroShunt (Santen Pharmaceuticals, not available in the United States).

AS-OCT or UBM can be used to look at different features of favorable bleb morphology based on the multilayered appearance, the low reflectivity of the bleb wall, the presence of episcleral fluid, and the lower internal reflectivity of the fluid-filled cavity. This technique, however, is largely still theoretical, and it will take time before it can be widely implemented in daily practice.

Surgical devices and planning. The most interesting images captured with AS-OCT and UBM are typically those of surgical devices. Often, anterior segment imaging is performed when a device is not placed exactly where the surgeon intended, when the device has migrated from the intended location, or when a complication related to device placement occurs. Intraoperative use of AS-OCT, which is integrated into some operating microscopes such as the Zeiss Opmi Lumera 700 and ReScan 700 (both Carl Zeiss Meditec), may allow for more accurate placement of MIGS devices.

AS-OCT and UBM are also invaluable in the surgical planning of traumatic cyclodialysis cleft repair. In fact, surgeons closing these clefts without the use of anterior segment imaging may already be behind the eight ball.

Anterior segment imaging provides clinical information that is valuable in the diagnosis and management of glaucoma, and the capabilities of these modalities will continue to expand over time. One highly practical way in which the technology can currently be used in routine glaucoma practice is for the evaluation of angle-closure suspects. Evidence suggests that AS-OCT may be more accurate than gonioscopy for determining whether the angle is open or closing. Although gonioscopic examination provides certain information that imaging cannot, imaging will certainly change the way we manage these patients now and in the future. 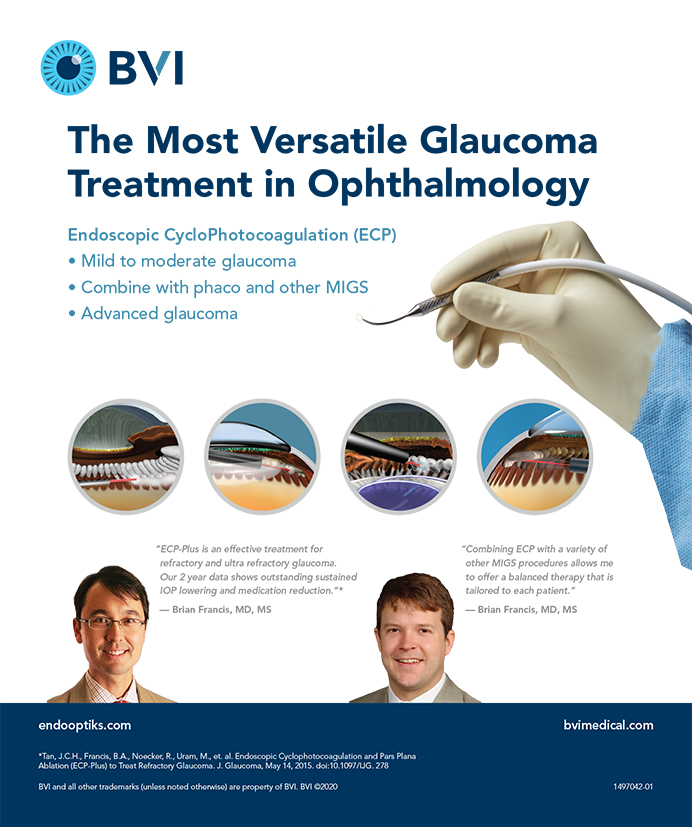 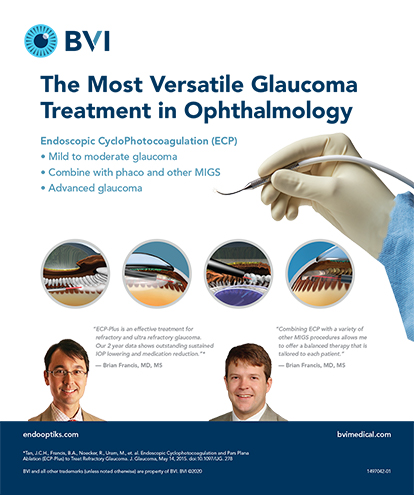