Optical coherence tomography (OCT) is widely used in the diagnosis and detection of glaucomatous progression. Many manufacturers make spectral-domain OCT (SD-OCT) devices, the most widely used type of OCT. In contrast to time-domain OCT, with SD-OCT, a greater area of the retina can be measured without interpolation of data. Additionally, the anterior segment can be imaged using the same machine. Most OCT machines have built-in proprietary software that can measure the peripapillary area as well as the macular region. Most units also have the capability of segmentation analysis, providing data regarding substructures of the retina. These data are presented in the form of a report, however, in which the patient’s measurements are compared to a normative database (also proprietary to the manufacturer). The overall as well as sectoral data are categorized as normal, borderline, or abnormal along with color-coding of green, yellow, and red.

• When assessing progression, physicians must determine whether or not changes are clinically significant and, if so, whether they are a result of glaucoma or something else.

Clinicians need to confirm a few rules of accurate imaging before accepting the results. One is the signal strength. Poor signal strength leads to a faint image, with the software unable to accurately identify the boundaries of the layers that it is trying to measure. Second is motion artifact. The eye typically has five microsaccades per second, so unless there is image tracking, motion artifact is very likely even with the most cooperative patient. The third rule is accurate acquisition of the image without cutoff at the edges and with good centration of the optic nerve and the fovea.

After confirming that the aforementioned rules have been met, the physician must rule out the presence of coexisting pathology that may confound the results and thus the interpretation.1 For example, vitreous traction on the retinal nerve fiber layer (RNFL) may result in artifactually increased RNFL thickness (Figure 1). Epiretinal membranes in the peripapillary and macular region are a common cause of increased RNFL or macular thickness, respectively. Next, the physician must confirm that the software has correctly identified the layers it is trying to measure (eg, RNFL, total retinal thickness, ganglion cell layer thickness, etc.). The physician then needs to determine if the patient’s ocular condition merits comparison to a normative database. For example, high myopes are not included in normative databases, and thus their measurements typically read as abnormal.

It is imperative for the clinician to have ready access to the raw images acquired before looking at the interpretation provided in the report. The technician acquiring the images needs to confirm that the patient blinks just before image acquisition or instills artificial tears to improve the image quality. The technician must also confirm the quality and accuracy of the data acquired before the patient returns to the physician. 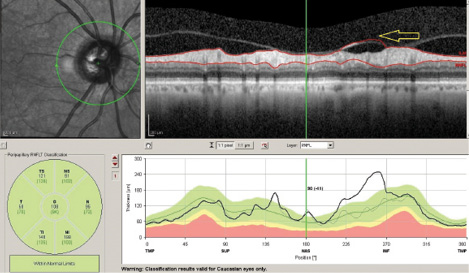 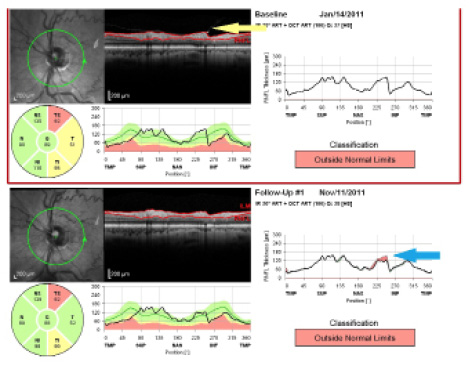 Figure 2. False progression artifact. Release of epiretinal membrane (noted in April visit; yellow arrow) creates a false appearance of progression (blue arrow) that the clinician may miss if he or she does not carefully examine the raw images.

Assessing progression presents different challenges. The software must be capable of aligning to the baseline or previous image acquired in terms of location as well as angulation, because a small but different tilt of the head can result in erroneous interpretation. The physician must also determine if the change detected by the machine is clinically significant (greater than 2 standard deviations of the measurement reproducibility2). When reviewing macular measurements, clinicians must consider whether a change is a result of glaucoma, release of the posterior vitreous attachments to the RNFL, or improvement of overall blood sugar control (Figure 2). Moreover, in the presence of uveitis, coexisting RNFL edema and subclinical macular edema can result in erroneous interpretation of normal-appearing thickness.3,4 Upon subsequent resolution of such edema (with uveitis treatment), the thickness of these layers can dramatically decrease once again, giving an erroneous interpretation of glaucomatous progression.

Cystic spaces in the RNFL or subretinal space in the peripapillary region in myopia as well as cystic changes in the outer plexiform layer in rapidly advancing glaucoma can also confound interpretation.4 Masqueraders of glaucoma such as neurosyphilis, optic disc drusen, ischemic optic neuropathy, hemianopia, and optic neuritis present another set of challenges to the assessment of OCT results (Figure 3).5

Clinicians use anterior segment OCT to detect either the angle opening width, which depends on identifying the scleral spur, or Schwalbe line. Both may be unclear depending on the quality of the image.6 Additionally, ambient lighting, the brightness of the instrument monitor, or a patient’s not having adapted to the dark can cause the angle to appear open, because its width is directly proportional to the pupil’s size.

SD-OCT has tremendous potential for glaucoma management, but eye care providers must be aware of possible artifacts. Re-acquiring the scans or manually correcting segmentation errors, though time consuming, may be needed for better clinical care. Continued improvements in software and segmentation algorithms may provide increasingly reliable quantitative thickness data. n

Where Does Ganglion Cell Analysis Fit?

RNFL Analysis in the Diagnosis of Glaucoma