Side effects, health risks, and a short duration of action limit the usefulness of this drug.

Many patients inquire about the use of marijuana for their uncontrolled glaucoma, especially in the setting of increased legalization in many states. In this article, Dr. Graul discusses various limitations of this Schedule I drug for long-term treatment of glaucoma, including its short duration of action, cost, ocular side effects, general health risks, and high potential for abuse. Patients should be counseled and informed about the lack of any scientific evidence demonstrating superiority of cannabis over other currently available pharmaceutical agents for glaucoma that are already approved by the FDA and extensively studied.

Since 1971, when it was first reported that smoking marijuana could lower IOP, the plant has attained near mythical status as a miracle drug for glaucoma.1 It is common for patients to ask ophthalmologists about it, and its use for treatment of glaucoma is often promoted by individuals who advocate for marijuana legalization.

The medical marijuana revolution began in 1974. Robert Randall, a 26-year-old man with advanced, poorly controlled glaucoma, observed that the haloes around lights he experienced because of his high IOP disappeared after he smoked marijuana. He eventually faced federal criminal charges for growing marijuana to relieve his symptoms, but he won a landmark court case, successfully persuading a federal judge that his marijuana use was a medical necessity.2 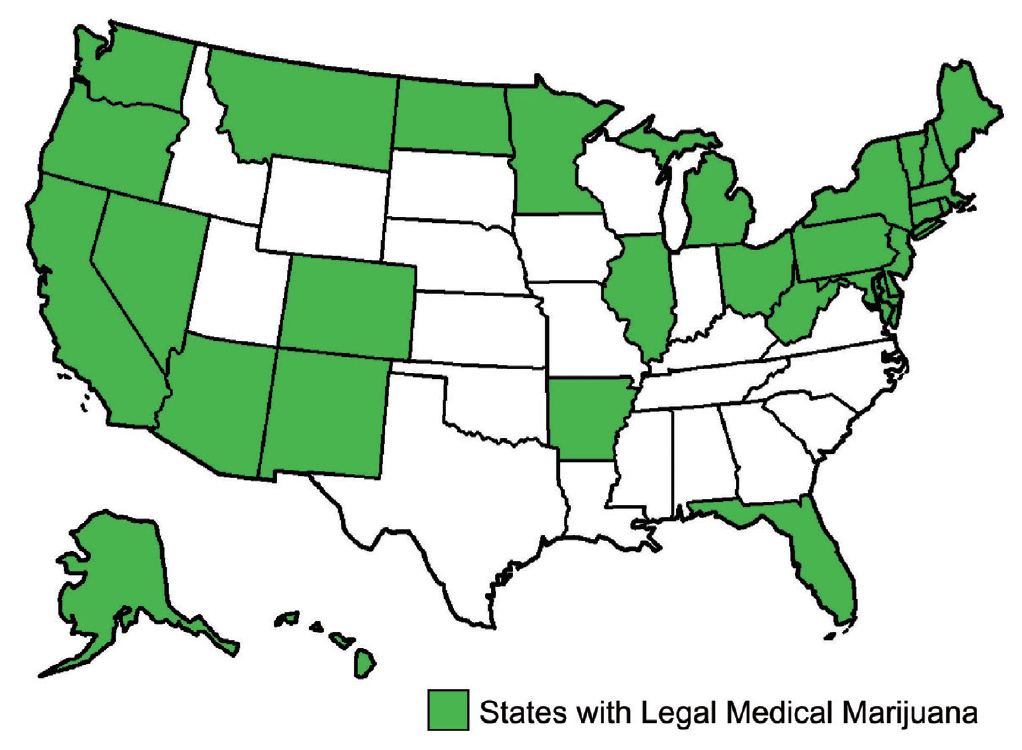 Figure 1. States with legal medical marijuana as of January 1, 2018.

Over the past 2 decades, many states have legalized marijuana for medical purposes, beginning with California in 1996. To date, 29 states and Washington, DC, now allow the use of the drug to treat disease, and each year legislation is introduced in additional states (Figure 1).3 At the federal level, bipartisan legislation to legalize medical marijuana is introduced annually. However, it remains classified as a Schedule I controlled substance with a high potential for abuse and no currently accepted use in medical treatment.4

Marijuana is a combination of the dried flowering leaves and tops of the plant Cannabis sativa. Delta-9 tetrahydrocannabinol (THC) was identified and isolated as the major active component in 1964. The plant contains more than 400 chemicals, most of which are related compounds called cannabinoids. There is a significant variability in potency of THC and other cannabinoids when the plant material is used.5

Marijuana and THC have been shown to lower IOP in 60% to 65% of both normal individuals and patients with glaucoma. Mean IOP reduction in one study was about 25%.5 An ocular hypotensive effect has been reported when the drug is smoked or ingested and when THC is inhaled or administered orally, sublingually, or intravenously.6 The duration of action is short, about 3 to 4 hours. There appears to be a dose-response relationship between the amount of marijuana consumed and the degree of IOP reduction, although the length of efficacy does not improve at higher doses.5

Topical administration of THC to the eye does not lower IOP.7,8 THC is a highly lipophilic compound and cannot be administered in a water-based vehicle. In one placebo-controlled double-masked study using an oil-based vehicle, no IOP-lowering effect was demonstrated. Both the placebo (vehicle) and the study drug caused significant ocular irritation.7

Although the precise mechanism of action of the drug remains unknown, cannabinoid receptors have been found in the trabecular meshwork, nonpigmented ciliary epithelium, and ciliary muscle of human eyes.9 In one study of aqueous humor dynamics, smoked marijuana improved uveoscleral outflow.10 Synthetic cannabinoids have been reported to decrease aqueous humor production in monkeys. Other cannabinoids may improve aqueous outflow or have neuroprotective effects through inhibition of glutamate release or by blocking glutamate receptors. They may also have antioxidant or vasorelaxive properties.9

LIMITATIONS FOR USE IN GLAUCOMA

Marijuana use has a significant number of side effects (Table 1). Of great concern in glaucoma patients, the drug can cause tachycardia and decreased blood pressure, which can reduce blood flow to an already compromised optic nerve.11-13 Smoking marijuana long-term may result in chronic obstructive pulmonary disease and may increase the risk of lung cancer.5 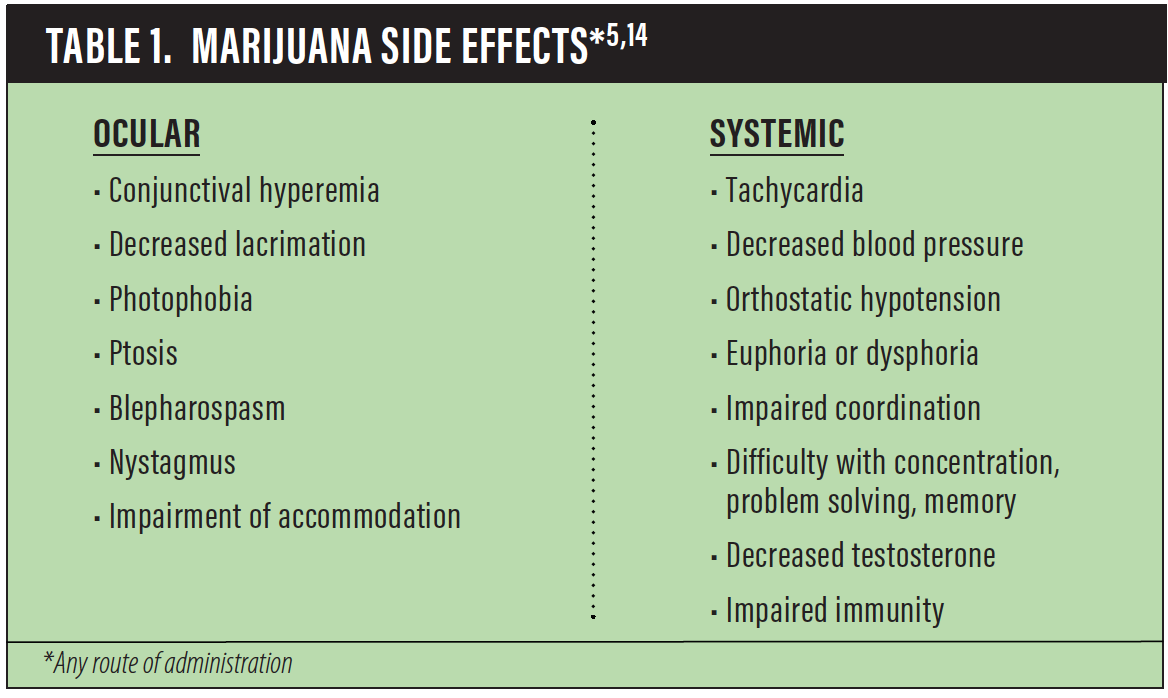 There has been little research into chronic use of marijuana to treat glaucoma. One study showed a significant development of tolerance to its ocular hypotensive effects.14 Additivity to other glaucoma medicines, drug-drug interactions, carcinogenicity, teratogenicity, and penetration into breast milk remain unknown.12,15

Because of the drug’s short duration of action, eight to 10 marijuana cigarettes would have to be smoked each day to provide 24-hour IOP control.5 This regimen would be unlikely to allow the patient to work or drive, and intermittent use could lead to disease progression. The cost of this regimen would also greatly exceed the cost of any current glaucoma drug. By one estimate, the cost of just three marijuana cigarettes per day ($23) would total more than $8,000 over 1 year.15

Glaucoma patients who inquire about use of marijuana should be counseled that, although the drug does lower IOP, there are many limitations to its use in glaucoma, including short duration of action, variable potency, side effects, development of tolerance, and health risks, particularly when smoked. Compared with marijuana, current glaucoma medications more consistently lower IOP with fewer side effects and a longer duration of action. Patients should be encouraged to continue adherence to prescribed therapy with long-term monitoring of their disease.

What Kind of Pigmentary Glaucoma Is This?

What Kind of Pigmentary Glaucoma Is This?