Prompt recognition and treatment are essential to reduce the risk of vision loss.

Malignant glaucoma, also commonly known as aqueous misdirection syndrome, is a rare form of secondary angle-closure glaucoma. This article presents some basic pearls and pointers for understanding and managing this condition.

Malignant glaucoma most commonly occurs postoperatively, but it can also occur after the use of medications that induce miosis or can present spontaneously. The clinical presentation includes diffuse shallowing of the anterior chamber with normal or elevated IOP. Some eyes, such as those with shallow anterior chambers or peripheral anterior synechiae, appear to be anatomically predisposed to malignant glaucoma.1 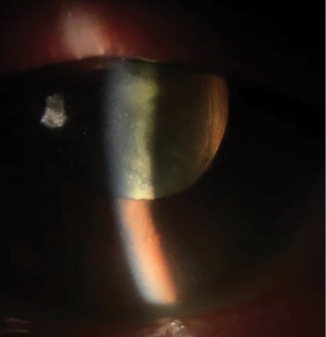 Figure. In malignant glaucoma, the anterior chamber is more uniformly shallow than in acute angle-closure glaucoma.

The exact mechanism of malignant glaucoma is unclear and may ultimately be multifactorial. One theory is that an increased volume or misdirected flow of aqueous behind the ciliary body, posterior lens capsule, and anterior hyaloid is unable to reach the anterior chamber, causing the volume of the vitreous cavity to expand.3 This increase in positive pressure posteriorly leads to forward movement of the lens-iris diaphragm, causing angle closure and, in many cases, increased IOP.

It is important to note, however, that malignant glaucoma that occurs after filtering surgery for glaucoma may present with normal IOP, given the presence of an alternative outflow pathway for aqueous. Others have postulated that choroidal expansion may be primarily responsible for the syndrome.4 Regardless of the exact mechanism, the treatment algorithm is largely the same, with the aim of eliminating the pressure gradient between anatomic compartments within the eye.

Once a patent peripheral iridotomy is in place to treat or exclude any component of pupillary block, medical management of malignant glaucoma typically starts with topical cycloplegic agents in an attempt to shift the lens-iris diaphragm posteriorly. Given that miotics can move the lens-iris diaphragm anteriorly, their use in these cases is contraindicated.

If the syndrome persists, topical and systemic aqueous suppressants, such as carbonic anhydrase inhibitors, can next be used to decrease aqueous production. Use of an intravenous hyperosmotic agent, such as mannitol, is often indicated in order to dehydrate the vitreous cavity.

Medical management of malignant glaucoma has been reported to be successful in about 50% of cases, although rates of recurrence after apparently successful medical treatment are not insignificant. As such, medications should be tapered gradually to prevent relapse.

4. MOVE TO LASER TREATMENT AS THE NEXT STEP

If medical management fails, laser management may be indicated. Nd:YAG capsulotomy or hyaloidotomy can be used to create a passage for fluid to move between the anterior and posterior segments and thereby eliminate any pressure gradient contributing to or causing malignant glaucoma.

In some cases, posterior capsulotomy can entirely resolve malignant glaucoma, particularly when fluid collection is visible behind the posterior capsule. In other instances, the Nd:YAG laser should be used to perform an anterior hyaloidotomy to relieve any pressure gradient between the anterior and posterior chambers. Capsulotomy and hyaloidotomy are usually indicated only in pseudophakic and aphakic eyes, although laser hyaloidotomy can potentially be performed through a peripheral iridotomy in phakic patients.

5. PROGRESS TO INCISIONAL SURGERY AS NEEDED

Vitrectomy is the mainstay of incisional surgery to treat malignant glaucoma.5-7 That being said, there are many variations of technique that can help resolve the condition. Core vitrectomy can be effective alone or in combination with lensectomy or with the combination of iridectomy, zonulectomy, and hyaloidectomy. Core vitrectomy alone is less effective in resolving malignant glaucoma in phakic patients than in pseudophakes; in phakic patients, success rates improve when core vitrectomy is combined with lensectomy.

Although core vitrectomy via the pars plana has long been considered the gold standard for incisional surgical management of malignant glaucoma, anterior vitrectomy combined with iridectomy, zonulectomy, and hyaloidectomy in pseudophakic patients may be equally effective.8 This approach would be particularly attractive in settings in which a vitreoretinal surgeon is not readily available. Phakic patients can benefit from phacoemulsification prior to augmented anterior vitrectomy.

Although rare, malignant glaucoma is a serious form of secondary angle-closure glaucoma that presents acutely, often with significantly elevated IOP. Prompt recognition of this condition and treatment to eliminate the pressure differential between the anterior and posterior segments are essential to reduce the risk of severe, permanent vision loss.