The Unknowns of the Outflow Pathway

Despite a considerable number of publications on aqueous outflow, translating research into improvements in daily clinical care is a difficult task. Several limitations negatively affect the treatment of our patients, including our inability to easily and routinely measure outflow in the clinic; our inability to see the entire outflow system during a clinical examination; uncertainty about the homeostatic mechanisms that govern IOP; and insufficient understanding of the microanatomy of outflow, the structure-function map of outflow, and, of course, the complex pathophysiology of outflow that leads to glaucoma. In addition, from a surgical viewpoint, our understanding of wound healing in the canal is quite primitive.

The inability to routinely measure outflow resistance in our patients—whose glaucomatous disease starts as a progressive disorder of outflow—creates a major gap in comprehending the nature and course of the disease. Instead of directly measuring outflow, we measure only the indirect consequences of a diseased outflow track: elevated IOP, retinal nerve fiber layer damage, and visual field (VF) loss. We are typically unable to measure outflow resistance in vivo in 99.9% of patients, except in a research environment, and that is still difficult at best. The following clinical scenario exemplifies why this may be important.

Rebecca started bringing her 58-year-old mother to the clinic, rain or shine, in 1983. At that time, her mother had high myopia, glaucomatous VF loss, and elevated IOP that was uncontrolled on two medications. After the patient's medications were maximized and argon laser trabeculoplasty was performed, her IOP decreased to the midteens; however, her VF loss worsened, necessitating filtration surgery. This was during the era of 5-fluorouracil, meaning multiple injections and postoperative visits and the inevitable keratitis. The patient's IOP was consistently in the low teens after filtration surgery, and fortunately the VF remained stable for the next 25 years. During this time, Rebecca's father was diagnosed with narrow-angle glaucoma, so naturally she worried about developing the disease herself.

Rebecca first saw one of us (R.L.F.) as a patient in the 1980s, when she was 33 years old. Her IOP was initially 16 mm Hg OU, and it varied over the years from a low of 15 mm Hg to a high of 21 mm Hg OU. Her OCT scans and baseline VFs were normal, her optic discs were healthy with no cupping (Figures 1 and 2), and she had mild myopia. Rebecca was classified as a glaucoma suspect, mainly due to her family history. Her routine testing every 2 to 3 years was completely normal. 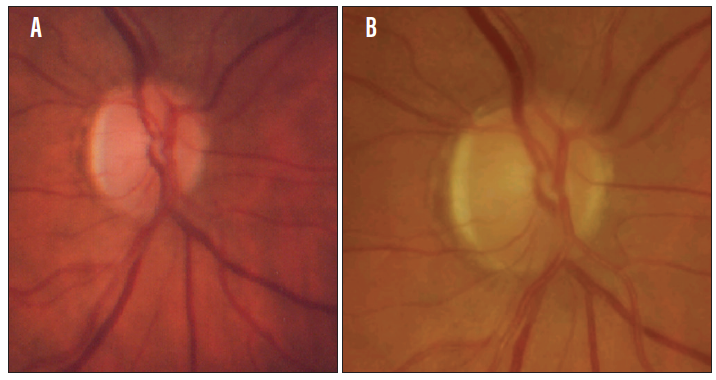 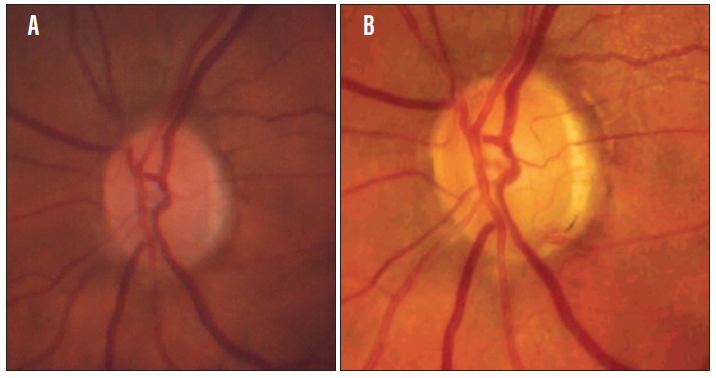 Two decades passed with no evidence of an IOP problem and persistence of normality. Then, at age 58, Rebecca presented with elevated IOP in the mid-20s mm Hg OU, and she had disc damage and VF loss in one eye (Figures 2–4). How could this suddenly happen? She had been monitored for a quarter of a century, we were always vigilant for glaucoma, and we saw no change in the parameters that are normally evaluated. What was it we were not testing that might have been a clue to the upcoming problem?

Glaucoma is an outflow disease, but Rebecca's outflow was never measured. Early on, we measured outflow only indirectly by substituting IOP. Typically, newly diagnosed glaucoma patients don't come to a clinic with a 25-year known history, but, in this case, we had a comprehensive patient history. There was no gradual rise or even marked fluctuation in IOP that suggested an upcoming problem.

In retrospect, we wonder whether repeated measurements of outflow resistance might have revealed a problem before the IOP suddenly rose. However, outflow resistance measurement is not currently practical in the clinical care of a glaucoma patient, and this metric remains an unknown factor. This scenario has been far too common in our practice over the past 35 years.

No doubt, Rebecca's outflow system was slowly undergoing damage from the unknown pathophysiology of primary open-angle glaucoma; however, our inability to measure this damage when Rebecca was 34, 45, or 58 years old hid much information about the natural course of her disease.

WHY DOES THIS HAPPEN?

One possibility is that the outflow system has such a marvelous reserve that it hides an IOP problem through backup homeostatic mechanisms until the system finally succumbs to significant IOP elevation. This is analogous to disc damage and VF loss. Progressive disc damage typically occurs before VF damage is detected because the immense redundancy of axons hides the damage (or selective loss of a class of axons early on is covered up by the other classes) in early disease. There can be a fair amount of disc damage before a VF defect appears, and we think similar damage to the outflow channels occurs before outflow dysregulation manifests as elevated IOP.

It is not uncommon for patients with narrow-angle disease to have 180° peripheral anterior synechiae but a fairly normal IOP. This is because the capacity of the remaining viable outflow channels masks the problem. After all, outflow calculations have shown that only two working collector channels are needed to handle an average of 2 to 3 μL of aqueous production per minute. Thirty-five years after Rebecca first came into the clinic, we are still unable to reliably measure outflow resistance on a daily basis.

The lack of a method to perform routine outflow measurement is magnified by our inability to see most of the outflow system, which is normally hidden in the sclera. Even if we couldn't measure outflow resistance, we could benefit from the ability to evaluate the microanatomy of the channels and determine whether atrophy or damage were occurring. Ideally, we would then be able to correlate this finding with a structure-function map of outflow and outflow capacity. Important work is being done on the microanatomy of the outflow channels, especially with regard to microtubules or valve-like structures in the canal,1,2 but much needs to be translated from bench to bedside before these findings are applicable in the clinic.

Gaps in outflow science are slowly being filled, but a thorough understanding of homeostasis is needed. Increased knowledge of what governs the homeostasis of outflow is vital to understanding the early pathology of glaucoma.

Microinvasive glaucoma surgery provides a window of opportunity to peek into the normally hidden outflow system, and this has helped substantiate laboratory benchwork. In addition, microinvasive glaucoma surgery has opened the door for us to evaluate distal outflow in the OR via examination of the episcleral vasculature, which reflects the health and capacity of the deeper intrascleral collector channels.3-5

Another unknown is what percentage of outflow is normally trabecular and what is uveoscleral. Reports in the literature vary significantly, again reflecting the complexity of attempting to measure outflow. The ability to monitor the components of outflow—including conventional and unconventional outflow rates—might provide early clues to glaucomatous damage, as the outflow system tries to compensate for early pathology.

This article covers only some high points of what is unknown about outflow in the living human eye. It is hoped that clinician-scientists will help develop tests that will permit more thorough evaluation of this amazingly complicated system.

We look forward to the day when we can intervene in the course of disease long before a patient's IOP rises to a dangerous level. Significant improvements in our understanding of the physiology and pathophysiology of outflow must occur before this can be accomplished. One day we hope to include outflow capacity as a vital sign of glaucoma and to further improve our understanding of this sneak thief of sight.

Surgical Approaches to Glaucoma in Africa

The Suprachoroidal Space: The Next Frontier