Detecting and Treating Glaucoma in a Myopic Patient Without High IOP

Several population-based studies have shown an association between myopia and glaucoma. The increased prevalence and coexistence of these diseases present numerous diagnostic and therapeutic challenges for clinicians. Tilted discs, shallow cupping, a pale neuroretinal rim, and parapapillary atrophy observed in high myopia make the optic nerve assessment for glaucoma difficult. Moreover, functional changes on visual field testing may be due to myopia alone. In addition to a brief overview of epidemiology and pathophysiology, Drs. Chang and Singh provide practical tips on managing patients with coexisting myopia and glaucoma, with an emphasis on longitudinal follow-up to confirm that the diagnosis is accurate and to monitor patients for progression.

The prevalence of myopia is increasing both in the United States and worldwide. Between 1971 and 1972, the National Health and Nutrition Examination Survey (NHANES) estimated that 25% of the US population between the ages of 12 and 54 years had myopia. Using the same methodology, the 1999 to 2004 NHANES revealed that the prevalence of this refractive error had risen to 41.6%.1 Estimated to be approximately 38% in one report, the prevalence of childhood myopia in East Asian countries is particularly high.2

• The prevalence of myopia is increasing both in the United States and worldwide.

• High myopia often makes detecting glaucoma difficult, because optic nerve features may confound glaucomatous changes. In addition, pathologic myopia may cause visual field defects and retinal nerve fiber layer thinning that are indistinguishable from those found in glaucoma patients. Although this problem can occur in individuals of any ethnicity, the phenomenon has shown a marked increase in certain Asian populations in whom myopia is becoming endemic.

Usually defined as a refractive error of -6.00 D or more, high myopia often makes detecting glaucoma difficult, because optic nerve features may confound glaucomatous changes. In addition, pathologic myopia may cause visual field defects and retinal nerve fiber layer (RNFL) thinning that are indistinguishable from those found in glaucoma patients. Thus, when a middle-aged high myope presents for the first time with a visual field defect and IOP in the normal range, it is challenging to determine whether or not the patient truly has glaucoma and requires IOP-lowering therapy. This potential diagnostic dilemma is becoming more frequent in young adult populations, particularly those of Asian ancestry.

TO TREAT OR NOT TO TREAT?

Visual field changes and nerve fiber layer defects found on optic nerve imaging may be the result of myopia in certain cases and not necessarily glaucomatous in nature. Deciding whether or not to treat a glaucoma suspect with these characteristics, particularly when the IOP is not elevated, may be considered a tradeoff between the risks of therapy versus the benefits of reducing the likelihood of irreversible progressive optic nerve damage if indeed a component of the progression is related to IOP. Overtreatment is always a risk in such circumstances. Because a lifelong commitment to medications can be costly and adherence may not be ideal, physicians should always weigh the pros and cons of observing the myopic glaucoma suspect and withholding treatment until there is confirmation of a high likelihood of glaucomatous disease.

Additional factors to consider when deciding whether or not to treat the patient include his or her current visual function, an estimate of optic nerve “reserve” before the activities of daily living are affected, and the patient’s projected life expectancy, all of which may be difficult to assess. Although some practitioners consider progressive ganglion cell death that is faster than the expected age-related loss to be the concrete definition of glaucoma at the cellular level, clinicians are often asked to give a likelihood of disease based on a single visit without the longitudinal data necessary to measure rates of change. Unfortunately, commercially available measures of ganglion cell loss are not yet available, so functional testing with visual fields and structural imaging of various modalities remain the diagnostic mainstays in current practice.

Given a strong epidemiologic relationship between myopia and glaucoma, as demonstrated in numerous studies,3 there is great interest in understanding the physiologic mechanisms that define the association. Abnormalities of the lamina cribrosa associated with high myopia may explain the higher susceptibility of myopic eyes to glaucoma at any IOP level.3 In the large Singapore Epidemiology of Eye Diseases Study, 273 eyes with open-angle glaucoma had a higher IOP, longer axial length, and more negative spherical equivalent relative to those without glaucoma.4 Eyes with a refractive error of less than -3.00 D and an IOP above 20 mm Hg were 4.27 times (95% CI, 2.10-8.69) more likely to have glaucoma than eyes without these two risk factors.4 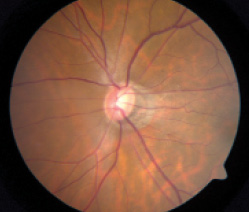 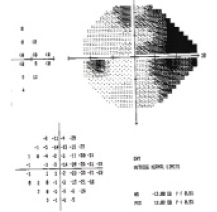 A 42-year-old Chinese woman with high myopia was referred for a glaucoma consultation regarding a visual field abnormality in her left eye (Figure 1). She first noticed that the vision in her left eye was abnormal when she spontaneously covered her right eye while driving. Her ophthalmologist performed a full eye examination and perimetric testing. The patient’s past medical, surgical, and ocular histories were unremarkable, and she had no family history of glaucoma. Her visual acuity was 20/20 OU, with a refractive error of -9.50 D OD and -8.50 D OS. Her IOP ranged from 15 to 16 mm Hg OU over multiple office visits. Central corneal thickness measured 500 µm OD and 506 µm OS, and the angles of both eyes were open. Although both optic nerves were suspicious for glaucoma on fundoscopy and exhibited abnormally thin nerve fiber layers on optical coherence tomography (OCT), the visual fields were markedly asymmetric: full in the right eye and a severe nasal abnormality in the left eye (Figure 2).

In both Figure 1 and Figure 2, it is apparent that the patient has myopic tilted discs with some RNFL defects. As a result of her unusual presentation, the patient had previously undergone magnetic resonance imaging of her brain to rule out central nervous system pathology. After a discussion regarding the pros and cons of ongoing surveillance with or without IOP-lowering therapy, the patient opted to receive glaucoma treatment. Several medications were tried as well as selective laser trabeculoplasty on her left eye, but the IOP did not decrease substantially. 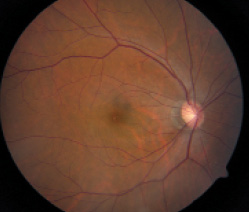 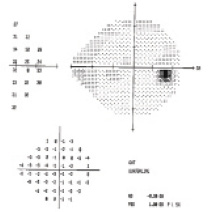 The patient has been observed annually for 6 years now with no progression on disc photography, OCT, or visual field testing (Humphrey Field Analyzer; Carl Zeiss Meditec), although her IOP has remained in the midteens bilaterally. One may never know whether or not she truly has glaucoma, but medical therapy, if well tolerated, is a reasonable approach to this case. Doshi and colleagues previously described a cohort of similar young to middle-aged myopes of Chinese descent, some of whom received IOP-lowering therapy but none of whom showed progressive glaucomatous disease during 7 years of follow-up.5 A key message from that article and our personal experience is that, in many such patients, optic nerve or visual field abnormalities may progress very slowly. Aggressive lowering of the IOP to single digits, which often requires surgery, may not be the ideal strategy unless the patient has unusually rapid disease progression.

A leading hypothesis of progressive high myopia leading to optic nerve damage and glaucomatous field loss relates to the strain gradient placed on susceptible axons within the prelaminar optic nerve head from temporal optic disc tilting and rotation. A recent article by Lee and colleagues investigated the ocular features of fellow eyes in 39 patients aged 20 to 50 years with unilateral glaucomatous-appearing visual field defects and myopia.6 When comparing optic disc torsion (deviation of the long axis of the disc from the vertical meridian) and tilt ratio (ratio between longest and shortest disc diameter) measured from disc photographs, they found optic disc torsion to be more prevalent—and of a higher degree—in eyes with visual field abnormalities. Several other investigators have reported a positive correlation with higher disc torsion and tilt in glaucomatous eyes that have underlying myopia.7,8 It is also important to remember that myopic tilt can severely affect OCT nerve fiber layer thickness and optic nerve head parameters, although ganglion cell macular measurements with separate normative data may still be used.9,10

It remains unknown if there is ongoing optic nerve damage following initial torsional changes at the level of the lamina cribrosa during axial elongation. Multiple studies have reported cross-sectional changes in the lamina cribrosa and peripapillary atrophy using enhanced depth imaging OCT techniques.11-14 Determining causation in such glaucoma patients is still difficult. In particular, it is important to investigate whether or not there is a decrease in the rate of field loss and RNFL thinning after age-related cessation of progressive myopia. Clinically, there is tremendous variability of disease progression in the postmyopic years, but clearly, a large subset of patients do much better than would be expected given the severity of optic nerve damage during young adulthood. These patients should undergo surveillance as rigorous as that for any other form of glaucoma with substantial reliance on visual field testing, particularly in individuals for whom optic nerve structural parameters are difficult to assess due to myopic changes. Of note, several large clinical trials such as the Collaborative Normal Tension Glaucoma Study (CNTGS) and the Ocular Hypertension Treatment Study (OHTS) showed that a high proportion of patients whose glaucomatous optic neuropathy was thought to have progressed on visual fields reverted back to baseline on repeat testing. Given the tremendous variability in visual field results, establishing good baseline information is important.

When eye care providers attempt to establish a glaucoma diagnosis, myopia can confound the clinical features. Although this problem can occur in individuals of any ethnicity, the phenomenon has shown a marked increase in certain Asian populations in whom myopia is becoming endemic. Generally, myopic patients presenting with visual field defects should be observed conservatively unless, or until, they demonstrate meaningful progression requiring more aggressive therapy. This is one example of “precision medicine” at work for each patient. n

Down, But Not Out: How the AAO Has Responded to Medicare's 2016 Ophthalmology Fee Cuts