It is time to take a fresh look at carbonic anhydrase inhibitors and sulfonamide allergy.

As the average age of the general population increases, the incidence of glaucoma follows. As a result, ophthalmologists are seeing more patients for whom eye drops and laser therapy may be insufficient and for whom surgery may be impractical, making it crucial to consider additional medical options such as oral carbonic anhydrase inhibitors (CAIs).

• Carbonic anhydrase inhibitors can be beneficial, but their use among sulfa-allergic patients has been limited by cross-reactivity concerns.

• A patient with a sulfa allergy has a higher risk of a subsequent reaction to carbonic anhydrase inhibitors than someone without a history of sulfa allergy, but the risk is not as great as might be expected of a cross-reactivity mechanism.

Although patients’ intolerance limits the use of this medication class, a subset of patients both tolerates and derives significant clinical benefit from drugs like oral acetazolamide, the most commonly used CAI. Even so, there is widespread concern about cross-reactivity and sulphonamide allergy, which affects approximately 3% of the general population1 and up to 8% of hospitalized patients.2 The package inserts for all CAIs state that “fatalities have occurred due to adverse reactions to sulphonamides.”3 A fresh look at the research, however, leads us to question current assumptions about this risk.

EVIDENCE IN THE LITERATURE

The first report of a reaction to acetazolamide was published in 1955, when Moseley and Baroody discussed a patient with congestive heart failure and a history of sulfa allergy who experienced gait abnormality, vertigo, paresthesias, and facial numbness 20 minutes after receiving oral Diamox (acetazolamide; Wyeth Pharmaceuticals).4 Mosely and Baroody postulated that the response to sulfa-based acetazolamide could have been related to a previous reaction to another sulfa medication.4 This case introduced the concept of sulfa cross-reactivity to the medical community.

A literature search uncovered five other case reports of acetazolamide reactions, but they were all limited by a history lacking in sulfa allergy and/or poor evidence for cross-reactivity.5-9 With a paucity of historical evidence, we must then examine the theoretical basis for cross-reactivity between sulfonamides.

The term sulfonamide refers to molecules that contain the SO2NH2 functional group (Figure 1), and it refers to two subsets: antibiotic and nonantibiotic sulfonamides. It should not be confused with sulfates, sulphites, or sulfurs, which are all chemically distinct from sulfonamides and demonstrate no cross-reactivity.10 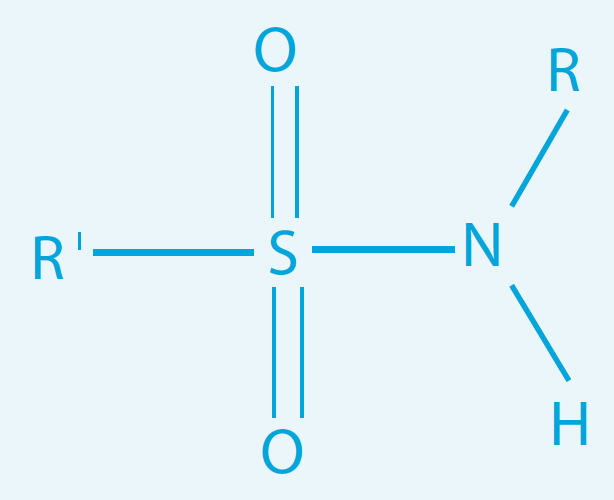 The basic sulfonamide functional group structure has not been shown to incite an immune response. The two structures responsible for the immune reactions induced by sulphonamides, the arylamine group at the N4 position and a five- or six-membered nitrogen-containing ring attached to the N1 nitrogen of the sulfonamide group (Figure 2), are only present on sulphonamide antibiotics (Figure 3). Because nonantibiotic sulfonamides such as acetazolamide (Figure 4) do not possess the immune-inducing structures found in antibiotic sulfonamides, cross-reactivity between these two types of sulfonamides is not supported theoretically.

It is the duty of clinicians to remain apprised of treatment options and to provide an accurate assessment of risk. It is to be hoped that FDA recommendations will be modified to reflect better understanding. As a community, eye care providers must remain vigilant and question traditional practice patterns based on misconceptions so that they may progress towards more robust, evidence-based best practices. n

4. Moseley V, Baroody N. Some observations on the use of acetazolamide as an oral diuretic in various edematous states and in uremia with hyperkalemia. Am Pract Digest Treat. 1955;6(4):558-566.

Detecting and Treating Glaucoma in a Myopic Patient Without High IOP