A white man in his 80s had a history of primary open-angle glaucoma with a maximal IOP of 34 mm Hg OD and 38 mm Hg OS and a central corneal thickness of 503 µm OD and 518 µm OS.1 The patient had undergone 360° argon laser trabeculoplasty in his left eye and later bilateral combined trabeculectomy and cataract extraction with IOL placement in both eyes. The target IOP was 14 mm Hg in both eyes.2 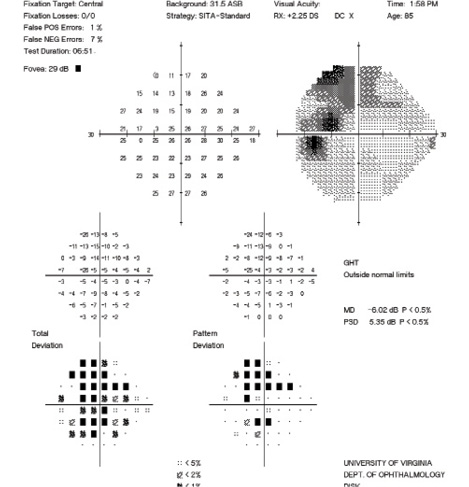 Surgery on the right eye was complicated by postoperative choroidal detachment and a shallow anterior chamber. We deepened the anterior chamber in the clinic with Healon (Abbott Medical Optics) during the early postoperative period. Prior to the trabeculectomy in the left eye, the patient was on brimonidine, timolol, and latanoprost topical treatment; he had a preoperative IOP of 22 mm Hg and documented visual field progression. The postoperative course in the left eye was unremarkable. The BCVA measured 20/30+, and the IOP remained well controlled on no topical medication until October 2012, when it rose to 23 mm Hg. We prescribed various drops over the next several visits. The patient showed no response to timolol, brimonidine, or latanoprost, and his IOP rose to 27 mm Hg by April 2013. On gonioscopy, the sclerostomy remained open (Figure 1).

HOW WOULD YOU PROCEED?

In February 2013, we needled the bleb in the clinic with a 25-gauge short needle. The conjunctiva was easily elevated, but filtration did not improve. In May, we revised the bleb under topical anesthesia with intracameral preservative-free lidocaine 1%. We needled the bleb again, immediately after elevating the flap during the internal revision, using a vitreous sweep and gonioscopy with a Mori Upright Surgical Gonio Lens (Ocular Instruments). At the end of the procedure, we administered a subconjunctival injection of 5-fluorouracil behind the bleb and dexamethasone inferiorly.

On postoperative day 1, the eye was soft but well formed. We prescribed a topical antibiotic and prednisolone four times a day. At 1 week, the IOP measured 5 mm Hg, and the anterior chamber was shallow, with the IOL forward, but not captured. We deepened the anterior chamber at the slit lamp with Healon. The patient continued the drop regimen, and we added pilocarpine 1% twice a day to ensure that the IOL maintained its position. A week later, the IOP was 6 mm Hg, but the patient had some choroidal effusions. We deepened the anterior chamber again, based on his history of slow postoperative choroidal resolution in the right eye. The following week, the IOP measured 7 mm Hg with improvement of the choroidal effusion and a deep anterior chamber. The patient continued to use prednisolone drops. Two weeks later, the IOP was 10 mm Hg, and we began to taper the prednisolone drops. Three weeks later, the IOP was 7 mm Hg, and the BCVA was stable at 20/25 on no medication. As of November 2014, the BCVA remained stable in the patient’s left eye, and the IOP in both eyes was in the single digits. The patient was using no glaucoma drops in either eye (Figure 2). 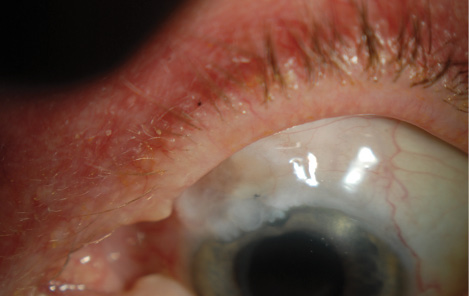 Figure 2. The bleb of the left eye is depicted in November 2014.

We consider internal bleb revision when we suspect a trabeculectomy has failed at the flap rather than due to adhesions between the conjunctiva and Tenon layer and the episclera. In these instances, it is easy to separate the overlying tissues from the flap with needling, but it may not be possible to lift a stuck flap with the needle introduced into the subconjunctival space. It may be necessary to dislodge the flap with an internal approach under gonioscopic guidance in the OR. This procedure is shorter than a new full-filtration procedure, and we find it provides a similar or easier postoperative course, because there is no incision to monitor. It has been described as an adjunct to cataract surgery when a filtration bleb is present.3 In this case and others, we have adopted it as a standalone procedure. A video of an internal revision for a closed trabeculectomy flap is available at bit.ly/sandra0516. n

2. The AGIS Investigators. The Advanced Glaucoma Intervention Study (AGIS): 7. The relationship between control of intraocular pressure and visual field deterioration. Am J Ophthalmol. 2000;130(4):429-440.

The Eyes of Africa Project

Is There Still a Role for Optic Disc Photography?