RNFL Analysis in the Diagnosis of Glaucoma

Glaucoma is generally described as a loss of retinal ganglion cell axons. This loss is routinely diagnosed by the presence of thinning of the optic nerve neuroretinal rim, peripapillary retinal nerve fiber layer (RNFL), and/or inner layers of the macula. Because these structural changes may precede perimetric visual field changes, sensitive imaging tools can improve physicians’ ability to detect early glaucoma and allow timely intervention to prevent vision loss.1 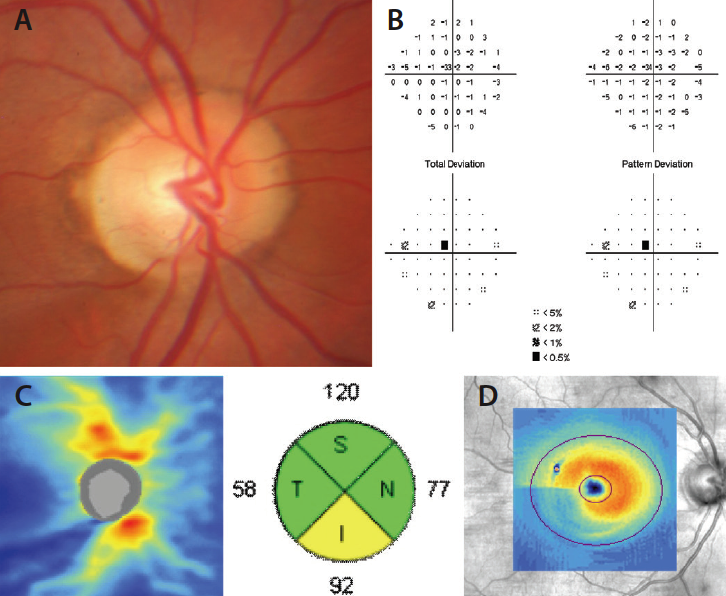 Structural changes in glaucoma can be detected with different imaging tools, including optical coherence tomography (OCT). Although OCT analyses of macular and optic nerve neuroretinal rim thickness have become increasingly popular in recent years, RNFL analysis has been the benchmark of OCT imaging in glaucoma since its inception.2 RNFL analysis provides an alternative to the visual inspection of the optic nerve neuroretinal rim as well as a quantitative estimation of retinal ganglion cell axonal loss. This can be extremely helpful in assessing glaucoma suspects whose disease symptoms can resemble those of other conditions such as myopia and physiologic cupping. For example, thinning of the inferior RNFL can help confirm inferior thinning of the optic nerve neuroretinal rim (Figure). Agreement between different diagnostic imaging studies (or structure-structure correlation) is extremely sensitive for the diagnosis of early glaucoma in the absence of perimetric findings.3,4

As a stand-alone test, RNFL analysis has great diagnostic ability to detect early glaucoma.5,6 Most OCT platforms provide RNFL thickness values at a fixed distance away from the optic nerve (approximately 3.5-mm-diameter, circular, cross-sectional thickness centered around the optic nerve). As expected from the well-known pattern of glaucomatous optic nerve neuroretinal rim thinning, the inferior RNFL quadrant generally undergoes the greatest amount of thinning and has the greatest area under the receiver operating characteristics curve. In fact, RNFL thickness generally follows the ISNT rule (ie, inferior, superior, nasal, temporal), and a violation of the RNFL’s ISNT rule can be indicative of glaucoma. On the other hand, the nasal and temporal quadrants generally have low area under the receiver operating characteristic curves (especially in early glaucoma), and thinning of these quadrants raises the possibility of nonglaucomatous optic neuropathy.

• Retinal nerve fiber layer analysis with optical coherence tomography provides an alternative to the visual inspection of the optic nerve neuroretinal rim as well as a quantitative estimation of retinal ganglion cell axonal loss. In addition to diagnosis, these measurements are useful for monitoring disease progression.

• Physicians must consider the possibility of confounding factors and assess data in retinal nerve fiber layer reports within the context of the clinical picture.

RNFL thickness measurements are highly reproducible, especially when acquired with spectral-domain OCT (SD-OCT) instruments. Intraclass correlation of multiple measurements of the inferior, superior, and average RNFL thickness in a single individual is greater than 96%.7 The quantitative and reproducible nature of SD-OCT thickness measurements can thus be used as a tool to monitor disease progression. In the case of Cirrus SD-OCT (Carl Zeiss Meditec), differences of 7 µm or more for the superior and inferior quadrants (or > 4 µm for average RNFL) between scans is outside the tolerance limit of variability and thus suggestive of interval change.7

Despite improvements in the image quality of SD-OCT and newer OCT instruments, acquisition artifacts as well as biological factors can affect the interpretation of RNFL thickness measurements. Axial length, disc size, gender, age, and neuro-ophthalmic and retinal diseases, among other factors, can affect RNFL thickness.8 Physicians must consider the possibility of confounding factors and assess data in RNFL reports within the context of the clinical picture. For example, quadrant and average RNFL thickness values will usually be relatively greater in individuals with very large optic discs, because thickness generally increases closer to the disc. In such cases (that include physiologic cupping and glaucoma suspects), the RNFL topography, as opposed to quadrant thickness, should be carefully evaluated for RNFL abnormalities.

SD-OCT and newer OCT instruments provide a rich view of the peripapillary RNFL. Nevertheless, quantitative data in the current RNFL analysis are limited to values obtained from cross-sectional slices of the image. Research presented at this year’s annual meeting of the American Glaucoma Society demonstrated an approach to obtaining average thickness values for each nerve fiber bundle (ie, superior and inferior arcade bundles, maculopapillary bundle, and peripheral retinal nerve fibers).9 This preliminary study suggests that arcade bundle thinning accounts for most changes detected by SD-OCT in glaucoma, consistent with recent findings of matching patterns of macular and peripapillary RNFL thinning.10

RNFL analysis is an extremely helpful tool for the management of glaucoma patients. It can be used in conjunction with other examination findings and diagnostic imaging tools to diagnose early or preperimetric cases, and the quantitative nature of these measurements is useful for monitoring disease progression. Current advances in imaging may not only improve the diagnostic accuracy and dynamic range of OCT but also help elucidate the pathophysiology of glaucoma. n

Down, But Not Out: How the AAO Has Responded to Medicare's 2016 Ophthalmology Fee Cuts