How to avoid, recognize, and manage these conditions as a glaucoma specialist today.

A choroidal effusion is an abnormal collection of serous or hemorrhagic fluid within the suprachoroidal space. This vision-threatening complication is associated with hypotony after incisional glaucoma surgery, occurring in 1.4% to 2% of trabeculectomies and 2.7% to 8.3% of glaucoma drainage device implantations.1 Outcomes can be satisfactory with prompt recognition and management. Although this complication can occur due to various etiologies, this article focuses on its association to glaucoma surgery, with five pointers for managing patients with choroidals.

1. ASSESS AND MITIGATE RISK BEFORE SURGERY

Choroidal effusion occurs when fluid collects in the suprachoroidal space, which is a potential space between the choroid and the sclera. The primary cause of choroidal effusion and hemorrhage is low IOP, although inflammation can sometimes play a role. Other risk factors include anticoagulation, aphakia, high myopia, prior ocular surgery, hypotony, straining, hypertension, and heart and respiratory disease. Patients with nanophthalmos, choroidal hemangioma, carotid cavernous fistula, Sturge-Weber syndrome, and other conditions associated with increased episcleral venous pressure are also predisposed to choroidal effusion and hemorrhage.

Some of the risk factors for choroidal effusion can be mitigated. Preoperatively, hyperosmotic agents can be used to reduce IOP and to prevent sudden IOP decrease during surgery. Comanagement with primary care physicians and internists is often helpful for cessation of anticoagulant medications during the perioperative period and for optimal blood pressure control.

Intraoperatively, IOP can be reduced slowly after the paracentesis is created in order to avoid a sudden drop in IOP. In high-risk cases, additional intraoperative measures can include prophylactic sclerotomies, placement of additional flow-restriction sutures (in trabeculectomy flaps and around drainage devices), construction of tighter and thicker trabeculectomy flaps, and thorough inspection for bleb leaks.

Postoperatively, aqueous suppressants should be avoided in the surgically treated eye and the fellow eye if possible. Carbonic anhydrase inhibitors and topical beta blockers administered after incisional glaucoma surgery can lead to increased risk of choroidal effusion and should therefore be avoided. Additionally, the patient should be advised to avoid straining and Valsalva-type maneuvers.

Intraoperatively, the surgeon may notice a decreased red reflex and positive posterior pressure causing shallowing of the anterior chamber. The patient may note increased pain. The most important step is to close the incisions as quickly as possible.

Postoperative effusion or hemorrhage, often with shallowing of the anterior chamber, may be noted, especially in patients with postoperative hypotony. Patients with small peripheral effusions may be asymptomatic. Vision is variable, including relatively intact vision, refractive changes caused by anterior shift of the lens-iris diaphragm, and even significant vision loss from effusions that block the visual axis.

Choroidals can be visualized clinically on fundus examination, where they appear as up to four smooth and dome-shaped (convex) lobes of choroidal elevation with fluid accumulation. Ultrasonography can also be useful, especially in eyes with miotic pupils or other media opacities. B-scan ultrasonography can help to distinguish serous from hemorrhagic choroidals.2 With serous choroidals, B-scan ultrasonography shows dome-shaped retinal elevation with echolucent (dark) subretinal fluid (Figure 1). The retina does not move on dynamic ultrasonography, unlike with a retinal detachment. In severe cases, central retinal apposition—or kissing choroidals—can be seen (Figure 2).

Figure 1. Fundus photography showing a dome-shaped choroidal that occurred in a patient with hypotony after trabeculectomy (A). B-scan ultrasound of the same patient showing moderate echolucent (dark) choroidals due to serous choroidal effusion (B). 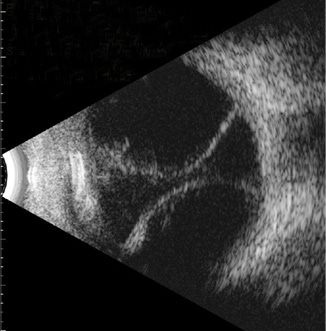 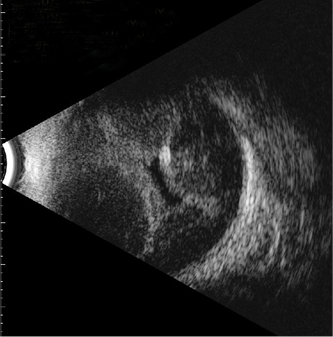 Figure 3. Massive suprachoroidal hemorrhage in a patient with aphakic glaucoma after blunt trauma to the eye. The choroidals show heterogeneous, high internal reflectivity (light areas), indicating the presence of blood. The appositional (kissing) choroidals required surgical drainage after about 10 days to allow time for liquefaction/lysis of the blood clot. Vision was restored to near baseline after surgical drainage.

A choroidal effusion is composed of transudate fluid from increased transmural pressure across capillaries that results from decreased IOP during or after glaucoma surgery. This condition is relatively painless and can build slowly over days to weeks after surgery. Clinically, serous choroidals occur in the setting of persistent postoperative hypotony, often with a bleb leak and/or overfiltration.

In contrast, a suprachoroidal hemorrhage manifests as a sudden onset of ocular pain with subsequent vision loss. Symptoms may be noted after a Valsalva-type maneuver. Patients report significant pain, so memorable that they can often identify the exact time of onset of the hemorrhage. On slit-lamp examination, there may be anterior chamber shallowing and vitreous prolapse into the anterior chamber in aphakic or pseudophakic patients. This is caused by an accumulation of blood in the suprachoroidal space from the disruption of the posterior ciliary arteries.3 The vessels are thought to be damaged directly by sudden decrease of IOP or indirectly by a serous choroidal effusion that strains and ruptures the arteries.

The overall prognosis is worse with suprachoroidal hemorrhage than with choroidal effusion. B-scan ultrasonography is often useful to distinguish between the two conditions. If surgical drainage is performed, the nature of the fluid in the choroidals can be definitively determined, with sanguineous fluid drained from hemorrhagic choroidals and straw-colored or clear fluid drained from serous choroidals.

The majority of less-severe focal and limited effusions resolve with observation and conservative treatment. Topical and even systemic steroids can be given to control inflammation, and cycloplegic agents can prevent iris-corneal or lens-corneal touch and decrease pain. Glaucoma medications must be discontinued in the setting of hypotony. In the acute phase of suprachoroidal hemorrhage, hypotensive glaucoma medications can be used to treat increased IOP.

The cause of hypotony should be corrected if possible. Bleb leaks can be managed with bandage contact lens placement or sutured with a tapered needle at the slit lamp. A shallow anterior chamber can be reformed by injecting an OVD through the paracentesis, and overfiltration can be managed with transconjunctival sutures. As IOP increases, the effusion decreases as fluid is resorbed.

In the case of a suprachoroidal hemorrhage with markedly increased IOP despite medical therapy, early drainage may be helpful to reduce the IOP to safer levels, although most of the clot in the suprachoroidal space will not drain. In this scenario, surgical drainage is typically delayed by 7 to 14 days if possible to allow clot lysis.

A conjunctival incision is made 4 to 5 mm from the limbus (parallel to the limbus), usually inferior. An approximately 3-mm radial scleral incision is made with a blade. When the suprachoroidal space is entered, the type of fluid (sanguineous vs clear or straw-colored) should be noted. The incision should be allowed to gape, and gentle pressure can be applied adjacent to the wound with a muscle hook or cotton swab to facilitate fluid drainage.

For large choroidal effusions or hemorrhages, two drainage sites can be made. The anterior chamber is reformed, and the incision is again allowed to gape to encourage fluid drainage. The procedure is repeated until no further fluid can be drained while the anterior chamber remains deep. The conjunctiva is closed over the open sclerotomy.

A serous choroidal that recurs despite surgical drainage implies that the glaucoma surgery should be revised or closed because of overfiltration. The most common complication after choroidal drainage is cataract formation in phakic patients. Retinal detachment has been noted in anecdotal reports but is not common.

Continuity of care is improved when glaucoma specialists manage choroidal effusions and hemorrhages that can occur after glaucoma surgery. Modifications in trabeculectomy, glaucoma drainage implantation, and other procedures have reduced the likelihood these complications will occur, although they are still a possibility.

If a choroidal effusion or suprachoroidal hemorrhage does occur, outcomes can be good with prompt recognition and management. Retinal problems are uncommon after choroidal drainage, so it is not necessary to refer to a retina specialist, especially for the initial drainage procedure. Choroidal drainage is within the scope of practice of glaucoma specialists.