All stages of childbearing, from before conception to lactation, must be considered.

Because treating glaucoma in pregnancy is not a typical part of the glaucoma specialist's daily clinical practice, it is important to review this important topic from time to time. However, a literature search for updates and guidelines generates few results. Due to ethical reasons, evidence-based recommendations are lacking, as are formal guidelines. We do, however, have reviews, case series, a small retrospective study, anecdotal experience, and our personal biases toward liability risk. These are the pieces we must work with to solve the puzzle of how to best and most safely manage glaucoma in pregnancy.

In a survey of ophthalmologists in the United Kingdom, 25% of respondents admitted to having cared for pregnant patients with glaucoma in their practices. Of these, about one-third stated that they were uncertain how to manage patients' glaucoma medications during pregnancy.1 It is fair to hypothesize that a survey in the United States would generate similar results.

Glaucoma is most common among patients who are older than 40 years. Nevertheless, young female patients with preexisting glaucoma such as congenital or juvenile glaucoma or those with secondary types of glaucoma such as uveitic glaucoma, require careful disease management throughout their pregnancy and beyond. Primary open-angle glaucoma might also be present in women who delay pregnancy into their 40s by choice or by necessity.

When treating glaucoma in pregnancy, physicians must establish strong communication with both the patient and her OB/GYN specialist. Thorough and frequent patient evaluation is also necessary. Balancing the mother's risk of glaucomatous progression with the wellbeing of the fetus and newborn is paramount. When reviewing glaucoma in pregnancy, we must consider disease management within the frameworks of preconception, pregnancy, delivery, and lactation.

IOP AND GLAUCOMATOUS DAMAGE IN PREGNANCY

During pregnancy, IOP tends to decrease in women without glaucoma.1-5 Reasons for this may include increase in uveoscleral outflow, decrease in episcleral venous pressure, and decrease in corneoscleral rigidity. In a comparison study between IOP measured during the first and third trimesters, IOP was found to be lower in third-trimester patients than in first-trimester patients.6,7 Glaucoma was thought to advance slowly during pregnancy by extrapolation of these findings. Nevertheless, in a retrospective study of 15 pregnant glaucoma patients, the majority did not have worsening of their disease during pregnancy; however, a significant percentage of women (36%) developed either increased IOP or new visual field loss during pregnancy.8

When evaluating glaucoma in a female patient of childbearing age, it is important to ask about pregnancy or plans to become pregnant. If the patient is being treated with glaucoma medications, she must be informed that her medication regimen may change if she becomes pregnant. Some patients might assume that there is no risk to their health, pregnancy, or fetus as they are only using eye drops, whereas others may become significantly concerned and stop all their medications altogether upon learning of their pregnancy.

Ideally, our goal should be to treat and control glaucomatous disease before pregnancy occurs. This may mean performing selective laser trabeculoplasty (SLT) or glaucoma surgery earlier in the disease course in order to achieve better IOP control and to reduce the need for medications.

In 2015, the FDA implemented the Pregnancy and Lactation Labeling Rule to provide prescribers and patients with more descriptive labeling on the safety of a given drug. Before this system was introduced, the FDA classified drugs used during pregnancy by risk categories (Table 1). Categories A, B, C, D, and E range from safest to contraindicated. There are no category A glaucoma medications. Most fall within category C, and only one commonly used glaucoma drug is in category B. All glaucoma medications will reach the bloodstream, placenta, and fetal circulation, where exposure may be increased given fetal recirculation. Thus, it is preferable to avoid or minimize medication use during the first trimester. 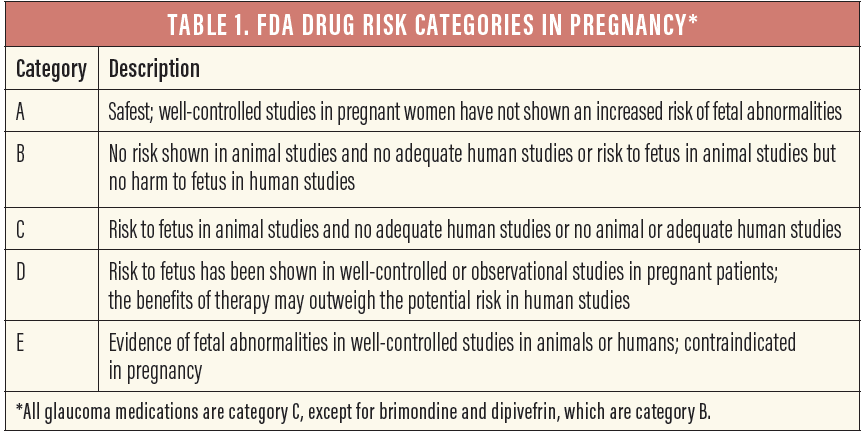 SLT can be performed safely during pregnancy and may prove useful in replacing medical treatment. Of all glaucoma medications, brimonidine is the safest to use in pregnancy, yet it is one of the most dangerous to use near delivery and lactation due to its known central nervous system depressant effect in newborn and young children.2-4 As pregnancy progresses past organogenesis, beta blockers and topical and systemic carbonic anhydrase inhibitors (CAIs) can be used. These drugs are sometimes used in the first trimester, but caution should be exercised with this approach.

The use of prostaglandin analogues (PGAs) in pregnancy should be avoided. PGAs can increase uterine contractions and theoretically precipitate miscarriage or premature labor. These drugs are quickly metabolized, which calls into question their likelihood to cause harm; however, a link between PGA use and miscarriage has been shown in animals.5,6 In a human study, one out of 10 patients exposed to latanoprost in the first trimester experienced a miscarriage.7 Because the potential for liability seems high, PGAs are usually stopped during pregnancy.

Surveys suggest that beta blockers may be the most commonly used glaucoma medication in pregnancy; however, these drugs may not be as safe as previously thought. Beta blockers can cause heart conduction disorders and bradycardia in fetuses and newborns as well as respiratory problems in newborns.8,9 Therefore, lower concentrations or gel forms might be advisable, and close observation of newborns exposed to beta blockers during pregnancy is mandatory. Physicians should also consider stopping the use of beta blockers 2 to 3 days before delivery.10 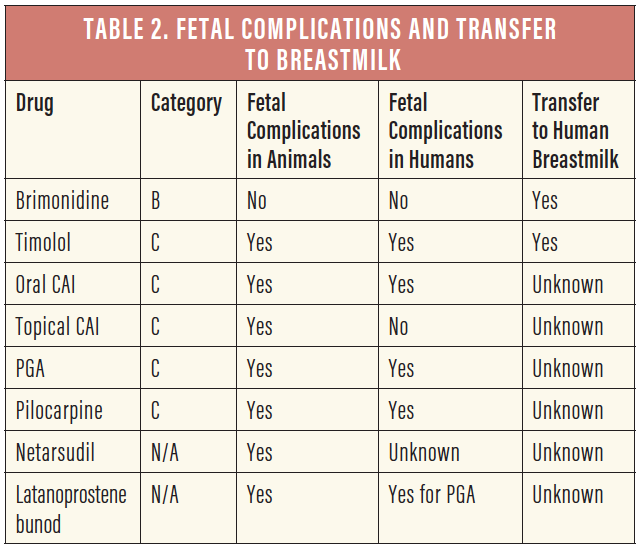 Oral CAIs are usually stopped in pregnant women, but some studies suggest their safety in pregnancy when used to treat idiopathic intracranial hypertension.11,12 Topical CAIs can be continued in pregnancy, although some studies report teratogenicity in animals.13,14 Pilocarpine used near term can cause neonatal hyperthermia, restlessness, and seizures.15 Nevertheless, there are several reports of safe use of pilocarpine in pregnancy. Data on the use of rho kinase inhibitors, the newest class of glaucoma medications, in pregnancy are not yet available. Latanoprostene bunod is a nitric oxide–donating PGA and, as such, would be contraindicated in pregnant patients (Table 2).

Overall, during pregnancy, glaucoma patients should be seen routinely, at least once every trimester, and they should undergo proper comprehensive examination and testing at each visit.

As pregnancy approaches delivery, physicians should discontinue the use of brimonidine and consider stopping beta blockers as well. In a survey of ophthalmologists and OB-GYN specialists, there was no agreement in the perception of indication for cesarean section (C-section) in patients with eye conditions, including glaucoma.16 To date, there is no evidence to support recommendation of a C-section over a vaginal delivery in patients with glaucoma. In addition, there is no known contraindication for performing a C-section in glaucoma patients.

As studied in trumpet players, Valsalva maneuvers can cause increases in IOP,17 but there are seemingly no studies measuring IOP in pregnant women with glaucoma during labor. Blood loss and hypotension may pose a bigger threat to optic nerve health and glaucomatous progression than Valsalva maneuvers. Patients with previous glaucoma surgery may ask their eye care providers if they are at a higher risk of complications during vaginal delivery; however, there are anecdotal accounts of patients undergoing safe vaginal delivery after glaucoma surgery.

Glaucoma medications can appear in human breastmilk and, in some cases, in more concentrated form than in serum. PGAs might be the safest medication to use during lactation. CAIs may be safe as well, but caution must be exercised in the event of kidney disease or acidosis in newborns. Beta blockers should be avoided or used cautiously, and brimonidine is contraindicated during lactation.

If possible, glaucoma surgery during pregnancy should be avoided. General anesthesia and antimetabolites can pose unnecessary risks to pregnant women and fetuses.

If surgery is required, special precautions must be taken, including proper body positioning, close monitoring, and avoidance of antimetabolites (mitomycin C and 5-fluorouracil). Topical anesthetics such as lidocaine are category B drugs and are thus considered safe. To prevent hypotension, pregnant patients should rotate their waist, hips, and legs to the left side while keeping their head straight when in supine position during surgery.

Pregnant patients with advanced glaucoma and uncontrolled IOP despite medication will need to undergo surgery, but it is best to avoid it during the first trimester. When proceeding with surgery, local anesthesia is safest. Topical lidocaine, subconjunctival lidocaine, or an anterior peribulbar block are also good options. Avoiding sedation can minimize risk to the fetus. There are reports of successful trabeculectomies without the use of antimetabolites as well as successful tube implantations, which do not require the use of antimetabolites.18 Micropulse laser treatment is another alternative and should likely be performed under peribulbar block instead of sedation. Microinvasive glaucoma surgery can also be performed under topical anesthesia.

THE RANGE OF GLAUCOMA IN PREGNANCY

Glaucoma in pregnancy can range from a patient with controlled IOP and no visual field loss on one or two medications to a patient with high IOP despite maximum tolerated medical therapy and severe visual field loss. These two patients would necessitate very different treatment approaches. In the former, SLT as replacement therapy could enable discontinuation of medications throughout pregnancy. In the latter, surgery (usually best avoided in pregnancy) may be indicated to prevent blindness.

With regard to postoperative care, careful attention must be paid to the use of safe antibiotics and steroids. Erythromycin and polymyxin can be used, as can local steroids. Nasolacrimal duct occlusion or punctal plugs and eyelid closure should be applied after the instillation of drops.19

It is important that we educate all childbearing-age female glaucoma patients on the importance of communicating any plan to become pregnant so that we can determine a tentative glaucoma treatment plan before pregnancy occurs. We should aim to decrease the use of medications as much as possible, especially during the patient's first trimester. If the disease allows, we should stop all medications during the first trimester, or we should continue only brimonidine and later resume beta blockers and CAIs if needed in the second and third trimesters. Other options such as SLT can be offered to lower IOP and replace medical therapy.

Pregnant patients should be monitored closely with careful examination and testing, and they should be educated about the importance of compliance with their follow-up visits and treatment to prevent glaucomatous progression. For patients with true and imminent risk of vision loss, do not defer treatment, even if it means performing surgery during pregnancy.

16. Mohammadi SF, Letafat-Nejad M, Ashrafi E, Delshad-Aghdam H. A survey of ophthalmologists and gynecologists regarding termination of pregnancy and choice of delivery mode in the presence of eye diseases. J Curr Ophthalmol. 2017;29(2):126-132.

Infection After Implantation of a Subconjunctival Stent